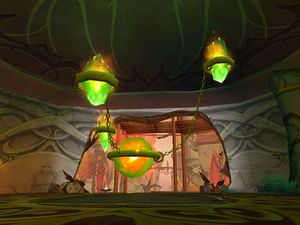 Den of Iniquity is an area inside Sunwell Plateau. Shortly after exiting the Apex Point the Den of Iniquity can be entered from a hallway, the subzone is a very large circular room in a state of disrepair that's only source of light is the doorways and fel crystals hanging in the middle of the room, it is here that the blue dragon Madrigosa locks the raid from continuing into the Dead Scar with a impassable wall of ice.

After Brutallus murders the blue dragon he will scream furiously, causing the ice wall to shatter and knock raid members near the exit towards the back wall of the room. Entry back to the den is impossible, as the player must fall after exiting the den.