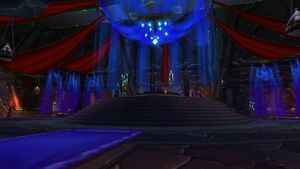 The Den of Mortal Delights is a blood elf-themed area consisting of a few lounges and the decorated northern rampart of the Black Temple. As the area's name suggests, various Illidari women and female demons can be found relaxing and walking the hallways of the harem-themed area, though no patrons can be found. At the very end of a long stretch hallway is the deadly and alluring shivarra demoness Mother Shahraz.

As Maiev was racing to the top of the Black Temple, she noticed killed concubines and sin'dorei sorcerers.[1]

The only male gender mob of the area, they will attempt kick enemies and sleep them

A succubus mob that travels in pairs with Sister of Pain, she cast healing and protection type spells to her and the Sister of Pain

Another succubus mob that delights in pain, she will flat out try to kill her enemies with shadow based attacks

A priestess that delight upon the misery of her enemies, casts a curse that deals shadow damage and stops at 50% health

A priestess that brings the Betrayers madness anywhere she goes, she casts a debuff that lowers or increases the power of her enemies

An poor enslaved man that forcefully does the bidding of his captors, can use