Departures is chapter two (2) of the prologue campaign, Exodus of the Horde, in Warcraft III: Reign of Chaos. 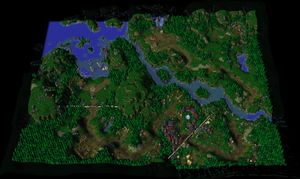 Thrall: "It's been three days, and this... prophet has yet to show himself. I hope I'm not making a huge mistake by trusting him."
A Grunt runs up to Thrall.

Grunt: "Warchief, the clans are assembling as you ordered, but it will take them some time to reach us."

Thrall: "Then we must prepare this camp immediately. I want my warriors to have food and proper lodgings when they arrive."

Thrall: "Warrior, has there been any word from Grom Hellscream? He and the Warsong clan were supposed to have been here by now."

Grunt: "No, Warchief. We haven't heard from Hellscream in some time."

Thrall: "Damn it, Grom. Where the hell are you?"

Captain: "You orcs are in violation of the Alliance Internment Act! We've already captured one of your leaders. If you surrender now, we'll spare your lives."

Grunt: "Warchief, they say they've captured one of our leaders! Maybe they're referring to Grom?"

Thrall: "I hope not. But if they have captured Hellscream, I'll make them regret it! Lok-Tar Ogar! Come, my warriors! We must drive the humans back!"

Grunt: "Warchief! We've found where they're holding Grom, but the area is protected by fortified guard towers!"

Thrall: "Then destroy them! Hellscream must be freed!"

Thrall approaches the cages. Grom Hellscream breaks free from one of them and runs up to Thrall.

Thrall: "Grom, are you alright?"

Thrall: "Great, 'cause we're getting out of here now. We're leaving the human lands for good."

Grom Hellscream: "Finally. Follow me. I have an idea."
Grom runs down the path to the nearby shore, where some human ships lie moored.

Grom Hellscream: "We can set sail on the humans' own ships."

Thrall: "Perfect. But we'll need to wait for the rest of the Horde--"
A large force of Grunts arrives.

Grunt: "The Horde is assembled, Warchief. We await only your command."
As the ships set sail, the Prophet watches from a nearby cliff.

Following the instructions of the mysterious Prophet, Thrall is assembling the clans to prepare to leave for Kalimdor. However, it would take a while before all the clans had gathered. Not having heard from the Prophet in three days, Thrall began to worry. Even more troubling was that Grom Hellscream hadn't been seen in some time. Thrall established a base in preparation for the Horde's arrival.[3]

However, just as the base was finished, a group of human footmen from a nearby Alliance Naval Base approached and ordered the orcs to surrender. The human captain informed the orcs that the they had already captured one of their leaders - Hellscream. Determined to rescue his friend, Thrall and his warriors slew the human attackers and launched an attack on the internment camp. The orcs fought their way through the camp's defenses, rescuing many captured orcs in the process. Eventually, Thrall and his warriors located Hellscream, but before they could free him, they had to destroy three guard towers protecting the area. When this was done, Thrall released Hellscream.[3]

Hellscream hadn't been hurt (with the exception of his pride) and was eager to leave the human lands. He showed Thrall some human ships docked at the camp. Seconds later, the rest of the clans arrived and the Horde assembled, the orcs commandeered the ships and set sail for Kalimdor. While they were sailing Medivh watches the Horde and tells that in Kalimdor is the only place where their salvation is assured.[3]