For other uses, see Derek (disambiguation).

Derek Proudmoore was the commander of the Third Fleet of Kul Tiras. He was also the eldest son[2] of Grand Admiral Daelin Proudmoore and Katherine, and the elder sibling of Jaina and Tandred.[3][4] He died on the seas during the Second War, his fleet destroyed by the fire of the red dragons under the Horde's control. Approximately thirty years later, Derek was raised by Sylvanas Windrunner's Val'kyr as a Forsaken, with the intention of turning him into a weapon against House Proudmoore. However, he was rescued by Baine Bloodhoof, reunited with his sister Jaina, and introduced to Calia Menethil, becoming loyal to her, to the point of joining the Horde.

Before his death, Jaina had assumed that Derek would be Lord Admiral after Daelin.[5]

During the Second War, Derek was in command of a destroyer in the Third Fleet, accompanying his father in battle against the orcish navy. Near Crestfall, they suddenly came under attack by orcish dragon riders accompanying a Horde fleet commandeered by the Black Tooth Grin clan.[6] Though he attempted to warn his father of the danger, Derek was killed by one of the dragons as he stood on top of the crow's nest. His boat was sent to the bottom shortly thereafter.[7]

Kurdran Wildhammer and his gryphon riders joined the battle shortly afterward, killing several dragon riders while their gryphons slaughtered the dragons. The remaining dragon riders fled and were pursued by Kurdran and his brethren, allowing Admiral Proudmoore to focus on destroying the orcish navy, ensuring his son's death wasn't in vain.[8] Daelin never forgot his child's death, and his hatred of the orcs continued to fester like an open wound for the rest of his life.[6] The wreck of Derek's fleet can still be found to this day on the coast of the Wetlands.

Derek's grave can be found at Lord Admiral's Rest in Boralus.

During the Fourth War, Derek Proudmoore's body was found by deep-sea diving from the Horde ship The Banshee's Wail. The Horde had not been expecting to find him, they had been looking for Marshal M. Valentine instead.[9] The body was used as bait to lure Derek's mother, Katherine, away from Boralus, as a distraction while Horde agents infiltrated the city to steal the Abyssal Scepter.[10] The body was then brought back to Zuldazar. 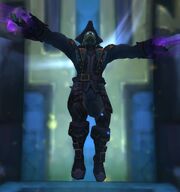 The resurrected Derek chained down in the Hall of Ritual in Dazar'alor.

Sylvanas Windrunner saw Derek as a valuable weapon, a dagger to plunge into the hearts of the Proudmoores when the time was right.[11] After the Battle of Dazar'alor and death of the Zandalari king Rastakhan, Sylvanas raised Derek's corpse to make him a Forsaken. Derek was horrified and confused at what had happened to him and begged for help and for his family. Sylvanas planned to twist him to become a weapon against Jaina and Katherine.[12]

In the end, this plan did not come to fruition as Baine Bloodhoof (with the help of Thomas Zelling) later freed Derek, secretly stole The Swift Vengeance, and took him to meet with Jaina outside the ruins of Theramore, the city Jaina had once ruled. While Jaina was furious that the Horde had risen her brother and rightly surmised that he was meant to be a weapon, she calmed down when she realized his will was still his own. Derek knew he could not return home to Kul Tiras; Jaina promised her intent to bring him home eventually, but in the meantime wished to bring him to someone who could help him, and that they would face his future together as a family.

In time, Varok Saurfang's revolutionaries clashed with Sylvanas Windrunner's loyalists, which saw the conflict ending in Saurfang's death and Sylvanas's abandonment of the Horde. In the aftermath, Jaina met with Calia and Derek at Seabreeze Village in Stormsong Valley. During this meeting, Calia and Derek learned that the war was over and it was implied that Calia and Derek had grown close. As the three conversed the Proudmoore siblings remarked that others would benefit from Calia's guidance, much like Derek had.[13] Unbeknownst to the three the Speaker of the Horde was spying on their meeting at the behest of Lilian Voss, who after being informed of the details remarked that she must act quickly.[14]

The meeting between Calia, Derek, and Jaina.

Around the time of the Black Empire's assault on Azeroth, Calia invited Jaina and Derek to another meeting in Stormsong Valley. She informed them that she had decided to leave Kul Tiras after receiving a letter from Lilian Voss asking her to help the Forsaken in the wake of their abandonment by Sylvanas. To Calia's surprise, Derek decided to accompany her, stating that while he would always be a Proudmoore, he had changed and it was time to "see where the tides [would] take [him]". Jaina accepted Calia and Derek's decisions but insisted on first bringing them to Katherine and Tandred so they could get a proper farewell.[15] Calia and Derek traveled to the Calston Estate in the Tirisfal Glades, where Lilian apologized for her role in Derek's rebirth and introduced the two to Delaryn Summermoon and the other Forsaken night elves, who had likewise been abandoned by Sylvanas. Calia and Derek quickly offered to help the undead elves and subsequently left the estate with them,[16] vowing to help them find a future rooted in something beyond hatred and malice.[17]

Knowing that the Forsaken couldn't remain in Orgrimmar forever, Lilian and Calia sought a new home for their people, while believing that the ruins of Lordaeron could one day be reclaimed and their homes there restored. Despite the truce between the Horde and Alliance, they knew that the Alliance ships wouldn't be happy to see Horde flags at sea, though Calia was confident that Derek could intervene on their behalf if they were intercepted. When Queen Talanji of the Zandalari Empire objected to peace with the Alliance and subsequently House Proudmoore, Voss was quick to remind her that Derek was one of the Forsaken and that the Forsaken were the Horde.[18]

[Cursed Eye of Paleth] may be the reason Derek's corpse was in an almost pristine state after being thirty years underwater, similar to how the corpse of Captain Halyndor is still intact.