This article is about the ship. For other uses, see Destroyer (disambiguation). 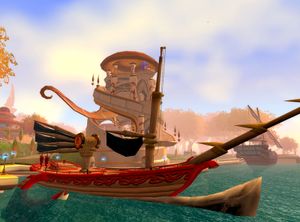 Destroyers are intermediary warships intended to fight during naval engagements as well as escort other vessels like transport ships and battleships. Many of the races of Azeroth and Draenor have their own variant of the destroyer class.

The commanders of Lunarfall and Frostwall can also build destroyers at their garrison shipyard. They are good against submarines and weak against battleships.

Elven destroyers were powerful warships from the fleets of Quel'Thalas. Crewed with highly-skilled elven seafarers, these swift-sailing vessels were prepared to engage the enemy wherever they might be found. Elven destroyers constituted a critical part of the Alliance naval defense force as they could unleash their firepower upon dreaded aerial forces of the Horde.[1]

The blood elves later reclaimed a few destroyers, the ones that were reclaimed receiving new red sails instead of the classical blue with a unicorn image.

Elven destroyers of the trireme hull type employ "junk sails" in a "schooner rig". This sail configuration is characterized by good windward handling and generally good speed across all sailing points (but less from running with the wind). This is consistent with the idea that the elven destroyer is a fast, highly maneuverable warship.

The troll destroyers (also known as wave riders)[2] were swift, ill-visaged longboats designed to cut through enemy armadas and deal damage to enemy vessels and their flying support. The savage troll crewmen were eager to enter into combat against Alliance ships of war and hungrily awaited any chance to stand mast to mast against the elven destroyers.[3]

Small canoe-like troll ships appear in Cataclysm and Mists of Pandaria, seemingly inspired by them, but much smaller and unarmed. Large ships belonging to Zul's war fleet seen at Stormsea Landing and the Isle of Giants seem to be based on a similar design. 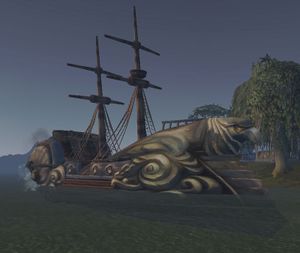 A destroyer pulling into Menethil Harbor.

Human destroyers (also known as icebreakers)[4] are massive paddlewheel-driven behemoths functioning on steam power and originally built to get through the icy waters of Northrend. To accomplish this they have a ram similar to a battleship.

They can be seen at Menethil Harbor, Stormwind Harbor, Valgarde, Valiance Keep, Venture Bay, the Strand of the Ancients, the Isle of Conquest and Highbank.

It is possible that the steam powerplant and paddlewheel system for these ships had, at the very least, dwarven or gnomish technical expertise in their design, as both races have considerable experience with steam power.

Early in development, they were previously reported to be called "steamships".[5]

Orc destroyers[6] are small spiked craft. These ships have also been called "gunships",[7] though that name normally refers to the flying crafts.

Wayward Landing was an area, removed from the beta stage of Mists of Pandaria, that was under attack by Horde forces led by Grothok Blackcrag, who had the title "Destroyer Captain".[8]

The arakkoa of the Order of the Awakened were known to have at least a destroyer, The Awakener. It was a powerful ship with large cannons, able to counter both submarines and battleships. Both Alliance and Horde commanders could buy its allegiance.

Elven destroyers are heavy, iron-clad warships that can quickly carry a half-dozen heavy cannon to any point on a coastline and bombard a target into submission. The destroyer moves at 20 miles per hour and has a crew of 7 (1 pilot and 6 gunners).[16]