Detect Traps allows a rogue to find traps laid out by others. It is learned at level 42.

[Disarm Trap], a rogue becomes essential for the safekeeping of any band of dungeon explorers. 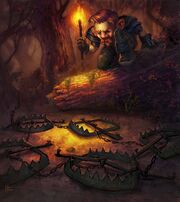 Many rogues expressed great displeasure over the change of Detect Traps to a passive ability in Patch 1.11. They claimed that they enjoyed spamming the "Swirly Ball" (a reference to the old casting animation), and now have "nothing to do during buff downtime at raids". Despite the many complaints, Blizzard has yet to make a formal response.

Other rogues also claim not being able to see a hunter's traps, nor being able to disarm them, until it is too late and the rogue is caught in one of them.

With the addition of