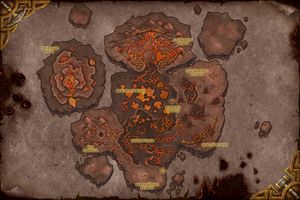 Deth'tilac is the most powerful of the ten new rare mob taming challenges, as well as the most powerful rare spawn ingame. It takes a dedicated hunter a great deal of patience or a group of helpful friends to weaken him enough for his will to falter so that he can be tamed. There's a big problem: Getting hit by Deth Strike will result in an imminent defeat. He's quite slow, so it's possible to shoot him from good distance of 40 meters {120 feet} while on the move. He also has an aura that, much to a healer's dismay, reduces any heals received by almost 100%.

It is possible for two (or three) hunters and their pets to take the beast to low health without further assistance. The basic premise is that one hunter lets their pet aggro, take a Deth Strike, die and thus reduce Deth'tilac's health. The other hunter, standing on the far other side, sends their pet in, so that the first hunter can feign and revive the dead pet. This repeats alternatingly until Deth'tilac is low enough to be tamed, at which point the hunter intending to tame the spider dismisses their current pet if necessary and uses

[Distracting Shot] to be able to start the tame, given enough distance and ongoing slows.

Auto-shots should continue whenever possible until the tame begins to prevent Deth Metal stacking, as well as

[Ice Trap] to guarantee a large enough time window for Feign Death and the tame itself.

An additional strategy is to kite him to the daily quest hub, where the NPCs will attack him. Simply kite him using autoshot and concussive shot until he reaches the camp. He will eventually Deth Strike the NPCs enough to reach the requires percent to tame him. A drawback to this strategy is that there are many more players in this area, allowing more room for tame stealing, other players pulling aggro, making it impossible to tame, or one too many players taunting and getting Deth Striked, resulting in Deth'tilac's defeat. To avoid accidents like this, its recommended to kite him behind the spire, but be careful not to fall off the cliff.

It is possible for another hunter to steal the tame while you are busy keeping Deth'tilac slowed. Be careful that it does not happen to you.

Because of his blueish purple hide, Deth'tilac is the most sought after spider.