For other uses, see Devourer of Souls (disambiguation).

The Devourer of Souls is the second and final boss of the Forge of Souls in Icecrown Citadel. It resembles the similarly-named Reliquary of Souls in the Black Temple.

Its death is the objective of the quest

As the chief operator of the Lich King's soul grinders, the creature called the Devourer dedicates himself to preventing souls from escaping the Lich King's dark machines.[2]

The dark industries Bronjahm carries out in the Forge of Souls produce tortured, fragmented spirits. To prevent their escape, and use every scrap of the damned, the Lich King created the Devourer of Souls. The Devourer of Souls hunts and consumes the stray spirits, and slowly breaks them down within its terrible form. The consumed souls are driven mad with anguish and suffering, but the Devourer's hunger is never sated. 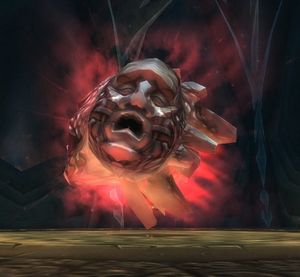 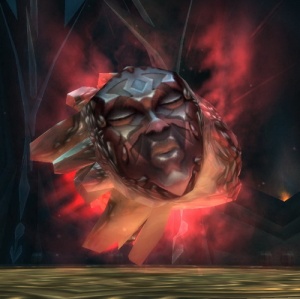 The Devourer fairly continuously casts Phantom Blast on the main tank if he is not doing anything else. If possible, this should be interrupted as a sequence of successful casts can quickly kill the tank. If your tank is a warrior, have him use

[Spell Reflection] as well, as it can be reflected back to The Devourer. Other things he could be doing include...

Somewhat frequently, the Devourer will leap to another player in the party and create a Well of Souls at that player's position. The well lasts upwards of 15 seconds and does some fairly intense damage to anyone still standing in it.

While Mirrored Soul is active, any damage dealt to the Devourer will be mirrored proportionally with whoever has the debuff. Thus, it is imperative to stop DPS while the debuff is up.

The Devourer will on occasion stop whatever else he is doing and summon a very large number of wraiths. They do not hit very hard but there are a lot of them and they cannot be targeted. Run away if the damage taken winds up being too great.

Finally, the Devourer will unleash a wail of souls. He does a 90 degree sweep of the room (either clockwise or counterclockwise) starting from the position of a random, but debuffed player. He starts wailing around three seconds after casting the debuff, and will wail for 15 seconds. Anyone caught in front of him takes a very high amount of damage ticking every 0.4 seconds.

One further thing to note is that the encounter will reset if the party runs back down the stairs, leaving enough time to resurrect 2 players (possibly more) before The Devourer respawns.

The Devourer has 3 faces through which will switch during the fight. They all have the same quotes.

Aggro
You dare look upon the host of souls? I SHALL DEVOUR YOU WHOLE!

Wailing Souls
Stare into the abyss and see your end.

Death
Devourer of Souls yells: The swell of souls will not be abated! You only delay the inevitable.
Lady Jaina Proudmoore/Lady Sylvanas Windrunner yells: Excellent work, champions! We shall set up our base camp in these chambers. My magi will get the Scourge transport device working shortly. Step inside it when you are ready for your next mission. I will meet you on the other side.