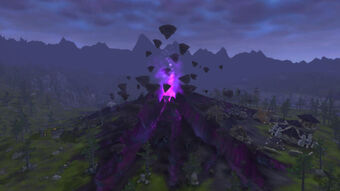 The Devouring Breach is a rift located in the center of the Twilight Highlands. It destroyed much of the area and damaged the nearby settlements. The rift is used by Twilight's Hammer as a base of operations against the nearby Wildhammers and Dragonmaw. While the dwarves at Firebeard's Patrol manage to hold, the orcs at Gorshak War Camp were defeated. They also seem to be responsible of destroying the cathedral at Firebeard Cemetery.

The Twilight's Hammer forces here were defeated by the Wildhammer dwarves' counterattack[1] liberating the area of the Hammer's control.