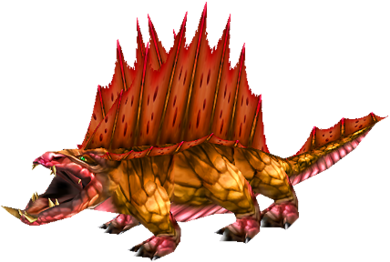 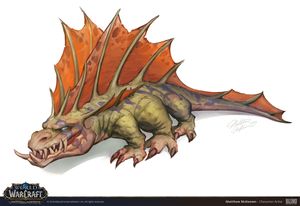 Battle for Azeroth concept art of a diemetradon. 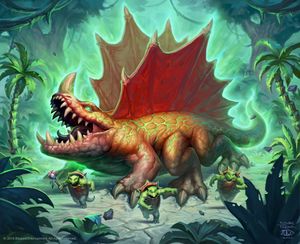 A diemetradon with the "Massive" adaptation in Hearthstone.

Diemetradon Hatchlings can be captured in pet battles in Un'Goro Crater.

The diemetradon — one of the strongest predators in the Un'Goro Crater — stalks its prey and rips it apart without mercy. Thick, shell-like plates cover this dinosaur's thick hide. Its six powerful stumpy legs end in sharp claws, and jagged teeth line its mouth. Two enormous, jagged red crests protrude from its back. This creature uses both its squat, strong legs tipped with sharp claws and its wickedly fanged mouth to great advantage, tearing apart its prey without a second thought. The diemetradon lumbers straight into battle, ripping and tearing with its claws and teeth. It targets enemies that deal large amounts of damage to it and attempts to dispatch them as quickly as possible, using its powerful attack to full advantage. The diemetradon also attempts to bull rush its enemies into trees or swampy areas.[3]