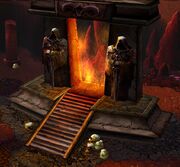 The gateway used to summon Hakkar the Houndmaster and the other demons in the War of the Ancients was closer to the Dark Portal than a dimensional gateway — the terminus of that portal was located on a Legion-controlled world.

The dimensional gateway from which Ner'zhul entered at the end of Beyond the Dark Portal.

On the Draenor side of the now-closed Dark Portal, the elder shaman Ner'zhul, chieftain of the Shadowmoon clan, planned to open dimensional gateways that would lead the Horde of Draenor to new, unspoiled worlds to conquer.[1] Teron Gorefiend also desired a world of his own,[2] and together they led their armies in an invasion of Azeroth in order to gather the artifacts required for their plans: the Jeweled Scepter of Sargeras, the Book of Medivh and the Eye of Dalaran.

During the last hours of the conflict Ner'zhul cast the Spell of Conjuration in order to create his gateways. Huge dimensional rifts crackling with the cosmic energies of the Twisting Nether appeared over the skies of Draenor. The energies emitted from these newly formed rifts torn apart the fabric of reality in Draenor and caused massive tidal waves, earthquakes, and volcanoes to erupt.[3] The planet was eventually shattered in the ensuing cataclysm.

There were four dimensional gateways left over from Ner'zhul's experiments, outside of Magtheridon's Black Temple. They brought demons in from the Twisting Nether which Magtheridon brought under his control. Illidan Stormrage shut down the gateways, which cut off the flow of demons and ended the extra stresses on the remnants of the planet.[4]

Despite this, several of the gates were still active even after the imprisonment of Magtheridon in Hellfire Citadel, several weeks after his defeat in Black Temple and Illidan was still trying to close them.[5]

Several of the dimensional gateways that Illidan closed can be found in Outland with The Burning Crusade. There are only three currently in the game, though four exist in The Frozen Throne.

According to Gathios the Shatterer, the portals closed in the aftermath of the Third War are not the ones that appeared in the forge camps.[6]

The "portals to other worlds" make up a collection of portals of which Chris Metzen revealed in the Developer Panels that Illidan closed these in Outland. Nevertheless, MagusRogue, a World of Warcraft RPG Game Designer from White-Wolf revealed the following:

"The portals were shut down by Illidan, actually. However, some of the quests in the Burning Crusade Expansion have you re-opening these and going to new dimensions, fighting the legion in new worlds. Should be awesome."[7]

"One of the things we're most excited about," says Metzen, "is the chance to create environments unlike anything you've seen in previous games. We really want to ramp it up for the players now. We're saying, 'Hey, you've graduated, you're over level 60 now, so let's get crazy with some really alien worlds and creatures." Even better, this is something that's infinitely expandable for us in updates and expansions down the line. There can always be more portal worlds."[8]