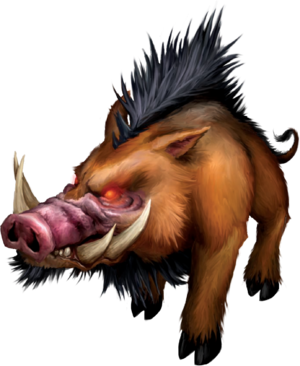 Dire boars are a type of boars.

Dire boars are omnivorous and spend most of their time rooting around, much as ordinary pigs do. Spines adorn this enormous boar's back and neck. Its tusks are long, sharp, and barbed, and its small red eyes seem to burn with a wicked intelligence. They viciously attack anything that approaches them, however. Dire boars grow up to 12 feet long and weigh as much as 2,000 pounds. A dire boar charges its opponent, trying to rip the target open with its tusks.[1]