From Wowpedia
(Redirected from Dire lion)
Jump to: navigation, search 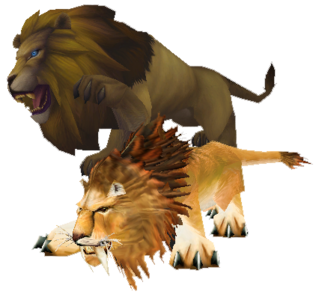 “Proud, noble, majestic: a perfect symbol for the Alliance.”

Lions are large, carnivorous cats. They are common predatory beasts found mainly in central Kalimdor. A variety of lions known as mountain lions usually roam the warm mountain regions and plains of high terrain. As predators, lions tend to be hostile and will attack players who approach them.

They are the fiercest of predators in the Barrens. The lions that stalk amongst the tall grass do so with cunning, stealth, and power.[1]

The noble and fearless lion is one of the traditional, bestial emblems of humanity. For generations it has adorned prominently the crests of Stormwind[2] and the Alliance (as well as being a popular motif in Stormwind's sister-kingdom of Lordaeron).[3][4][5] 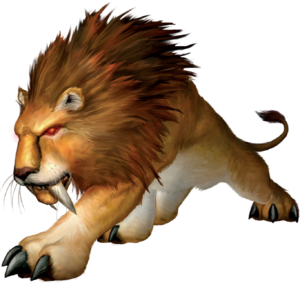 Male lions are between 5 to 8 feet long and weighs 330 to 550 pounds. Females are slightly smaller.[6] Some hunters choose them as their animal companion.[7]

Dire lions are large lions found on Azeroth, and in the Badlands. Their faces constantly betray a look of aggression. Dire lions are patient hunters, just like their smaller cousin, but apt take on considerably larger prey. Many dire lions grow to be up to 15 feet long and weigh up to 1,000 pounds. A dire lion attacks by running at prey, leaping, and clawing and biting as it rakes with its rear claws. It often jumps onto a creature larger than itself.[8] Dark Iron dwarves under Dedrik Thunderaxe had trained a dire lion to guard their cavern, and to ignore dwarves (it would not attack them). The lion wore an iron collar with two large loops on the top. They fed it a myriad of delicacies, including gnolls.[9]