He is up to something, but I do not know what.

Any who question his actions earn demselves a trip to de sands.

As long as he remains in power, my city will never be safe.

Speak to his guards. See what you can find out, but be discreet. We do not want to alert Jakra'zet to our actions.

It is not safe to ask questions about de general around here.

You are going to make more enemies than allies asking questions like dat around here. 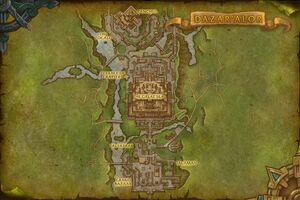 around Dazar'alor. Each one has a different response when talked to:

What can you tell me about General Jakra'zet?
I do not ask questions. I follow orders. It would be wise for you to do de same.

I have little time for idle chatter.

What can you tell me about General Jakra'zet?
Why do you ask such questions? Are you trying to get sent to de sands?

Whatever you need, make it quick.

What can you tell me about General Jakra'zet?
Do you have a death wish? De general has eyes and ears everywhere.

At certain points during the quest, the player will also be ambushed by Jakra'zet's Sandfury Assassins.

After questioning all of the enforcers, head to near the northeastern stairs to find Bladeguard Kaja and turn in the quest. On approach:

Bladeguard Kaja says: Hey you! Yes, you. Are you de one dat's been asking around about de general?