For the Mechagon Island quest, see

The Discs of Norgannon (or the Platinum Discs) are a set of enchanted artifacts which were created to transcribe the history in Azeroth as it unfolded.[1] They also have a collection of information pertaining to the titans' experiments with the Earthen, the progenitor of the dwarves and troggs. The majority of them are located in a vault deep inside the ruined titan city of Uldaman, in the Badlands of Khaz Modan. They lead to the gates of Uldum in southern Tanaris and to the Stone Watcher of Norgannon.

The Discs were crafted by Loken and Mimiron to commemorate the departure of the titan Pantheon so when they returned, they would posses a record of what had happened in their absence.[1]

After the titan keeper Loken was mind-washed by the Old Gods, Tyr and his allies, Archaedas and Ironaya, concluded that to overthrow their corrupted brother they would first need to gather intelligence on Loken and his activities. To this end, they planned to steal the Discs of Norgannon from Ulduar. Since the discs had recorded everything that had transpired in the world, they had also recorded Loken's betrayal. If there was any hope to undo his damage, it would be through a careful study of his actions.

While Tyr distracted Loken in the gates of Ulduar, Archaedas and Ironaya infiltrated the titan city and stole the discs. Once out, the three departed from the Storm Peaks knowing that Loken would soon hunt them down once he found the truth. After gathering their loyal forces, the three journeyed to the south where they hoped to find a refuge from which to plan their next move. When Loken found out the discs were stolen, he panicked because if Tyr and his allies showed the artifacts to Algalon or the Pantheon, his own life would be lost. Out of desperation, he turned to the Old Gods minions, the C'Thraxxi Zakazj and Kith'ix. After freeing and resurrecting them, the creatures felt the touch of Yogg-Saron on Loken's mind and they obeyed him to kill Tyr and the rest of his allies.

Far in the south, the C'Thraxxi caught up with the fleeing titan-forged. Tyr ordered Archaedas and Ironaya to flee with the discs while he stayed behind to hold off the Old God creatures, eventually sacrificing himself to defeat them. Archaedas and Ironaya returned and after burying him, continued their journey. They finally reached the easternmost titan-forged vault in Kalimdor: Uldaman. In there, the two titanic watchers carved out new chambers to hold the Discs of Norgannon and vowed to protect the history of Azeroth with their lives.

In Ulduar, Loken knew that he wouldn't recover the discs so he attempted to replace them instead. He created an archive of his own design which he dubbed the Tribunal of Ages, and adjusted the historical events contained to his liking, hiding his sins from the record.[2][3] The tribunal has several of these false discs in racks beneath it.

Upon defeating Archaedas, the guardian of the Discs, the room containing the Discs and other treasures will open, allowing players to access the Discs. Upon doing so, the Lore Keeper of Norgannon will materialize and begin explaining the origin of the Earthen. After receiving all of the information, the player can access the Discs again to receive their own miniature copy to take to either Thunder Bluff (Horde) or Ironforge (Alliance).

King Mechagon is in possession of a corrupted Norgannon disc according to mechagnome Archivist Bitbyte and its fragments have been discarded via the Mechagon waste system.[4][5] 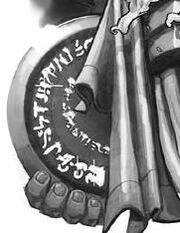 Discs of Norgannon in Shadows & Light.

The Discs of Norgannon,[6] also known as Disks of Uldaman,[7][8] are a series of platinum discs which a single ring binds. The discs bear imprints in the alien titan language, and written on the discs are all the universe's secrets. The discs' bearer gains phenomenal spellcasting abilities and protections against spells, as well as access to the mysteries contained within the discs' cryptic runes. Norgannon the Dreamweaver has kept the discs for ages immemorial, but rumors whisper that he has lost the artifacts. This story is true, as dwarven excavators in Uldaman recently discovered the discs — which bore proof of the dwarves' titanic genesis. The discs' true powers, however, will likely remain undiscovered. The knowledge contained in the discs is immense and puissant. Their secrets would topple mortal kingdoms and set the universe ablaze. Norgannon — and the rest of the pantheon — may soon return to Azeroth to recover the discs. The discs also act as a spellbook for every arcane spell in the universe (or most of them). Rumors maintain that the discs contain other powers as well — powers that could scorch the universe. None besides Norgannon — and perhaps not even he — knows how to access these capabilities.[6]

Eighty-nine discs are scattered on the shelves of the Ruined Library of Bael Modan. The platinum discs explain that the troggs were the titans' first attempt to create life from living stone, but the experiment was a failure. When the titans saw how brutal and misshapen the troggs were, they buried them in vaults all over the land. A number of dwarf groups are interested in obtaining the undamaged discs. Some slightly larger discs, called the Discs of Norgannon, are powerful magic artifacts and hold a secret history of the titans' war against the Old Gods. Several factions would do anything to get their hands on these invaluable discs. Some believe that the Bael Modan discs are the Discs of Norgannon.[9]