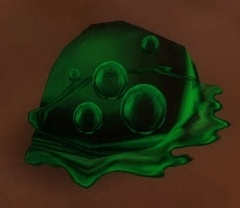 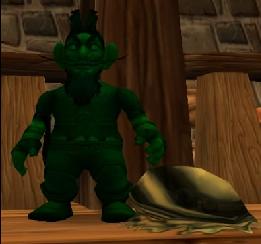 Disgusting Oozeling is a possible item inside Oozing Bags, which drop from level 50-60ish oozes, such as in the Swamp of Sorrows, Un'goro Crater, Winterspring and the Ruins of Ahn'Qiraj.

While not oozes, Dredge Strikers and Dredge Crushers in Silithus can also drop this.

Warning: Wear gloves and goggles while handling disgusting oozeling. DO NOT WASH. Will stain most armor.

Magic: Cannot be dealt more than 35% of their maximum health in one attack.

A Disgusting Oozeling projects a Disgusting Aura when it accompanies its owner which reduces the owner's defense by 20 and all resistances by 20, and colors its owner green as if the owner were poisoned.

The drop rate of the bag varies between 1.0% and 3.5% depending on the source, and the chance that the pet is inside the bag is roughly 1.7%.[2] This puts it at a similar rare status to the whelpling pets, and thus can sell for fairly large amounts of gold on the Auction House, at least as far as pets are concerned.