From Wowpedia
(Redirected from Disorder)
Jump to: navigation, search

“Magic is the art of circumventing the normal. [...] The stars march in order across the sky, the seasons fall one after the other with lockstepped regularity, and men and women live and die. If that does not happen, it's magic, the first warping of the universe, a few floorboards that are bent out of shape, waiting for industrious hands to pry them up.” 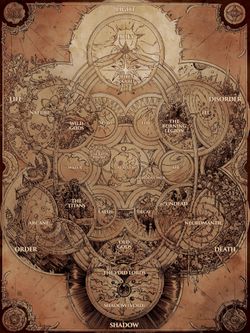 The cosmic forces, realms and denizens of the universe.

The universe is a realm filled with potent magics (or magiks[2][3][4] and magicks)[5][6] and mighty beings. Since the dawn of time, these forces[7] have influenced the cosmos, setting the stars in motion and the destiny of countless worlds and mortal civilizations.[8]

Magical energies are most apparent beneath the earth as well as in special locations - centers of elemental forces, otherworldly powers, and mystical energies.

The cosmic forces have influenced Azeroth and the surrounding cosmos, setting the stars in motion and shaping the destiny of countless worlds and mortal civilizations.

Light and Shadow are the most fundamental forces in existence. Although contradictory by their very nature, they are bound together on a cosmic scale. One cannot exist without the other. Pure Light and Shadow dwell in a realm outside the borders of reality, but shades of their presence are found in the physical universe. Light manifests as holy magic, while Shadow (also called the Void) appears as shadow magic.

The forces of Life and Death hold sway over every living thing in the physical universe. The energies of Life, known commonly as nature magic, promote growth and renewal in all things. Death, in the form of necromantic magic, acts as a counterbalance to Life. It is an unavoidable force that breeds despair in mortal hearts and pushes everything toward a state of entropic decay and eventual oblivion.

The forces of Order and Disorder govern the cosmic systems of the physical universe. Order is most commonly perceived in reality as arcane magic. This type of energy is innately volatile, and wielding it requires intense precision and concentration. Conversely, Disorder is manifested as highly destructive fel magic. This brutal and extremely addictive energy is fueled by drawing life from living beings.

The elements of fire, air, earth, and water serve as the basic building blocks of all matter in the physical universe. Shamanic cultures have long sought to live in harmony with, or assert dominion over, the elements. To do so, they called upon the primordial forces of Spirit and Decay. Those who seek to bring balance to the elements rely on Spirit (sometimes referred to as the fifth element by shaman, or chi by pandaren). This life-giving force interconnects and binds all things in existence as one. Decay is the tool of shaman seeking to subjugate and weaponize the elements themselves.

Elements can influence a variety of emotional positive and negative states: 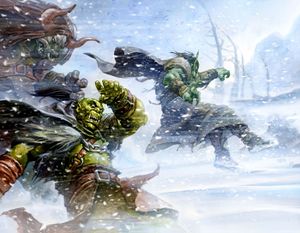 Arcane magic in the form of a frost spell.

On Azeroth, volatile arcane magic was once concentrated in the Well of Eternity, but its destruction spread arcane magic throughout the world.[7] Arcane is distinctive for its ability to bend other energies (such as Fire,[9][10] Life)[11][12][13] to the caster's will. It can be used to manipulate space and time.[14]

Arcane is derived from the phase transitions of mana - if mana were water, then arcane would be steam pressure.[15] Arcane energy is so similar to an element it might as well be one, for all magical intents and purposes.[9] Ley lines carry arcane magic. Sub-branches of arcane:

Technomancy, or techno-sorcery, is a form of magic employed by the ethereals, capable of modifying an item's arcane essence or housing items in a pocket dimension,[16] as well as opening portals.[17]

Chronomancy is the art of weaving time.

Fel magic is a destructive form of magic often used by the members of the Burning Legion. It is demonic, entropic, chaotic and extremely volatile. Its use frequently results in the alteration of the individual, or corruption, which manifests as a physical transformation such as a change to an individual's eyes or skin color, or heavy genetic mutations. All of the Burning Legion carry the taint of fel magic within their very blood, allowing them to spread greater evil.[18] Warlocks use life force to power their fel magic.[19]

Pure Light cannot exist within the physical universe but shades of it manifest as holy magic.[20] It can be channeled to heal, cleanse, and protect. Practitioners of the Light are called priests or paladins, devoted to cleansing the universe of darkness. The Light is often said to bring about feelings of positive emotion—hope, courage, comfort—coming from the "heart."[21]

Shadow magic is the manifestation of the Void in the universe.[22] A source of terrible power, it is the kind that comes at a price.[23] Although destructive, it can also be used to raise the undead or to harm the mind, imparting feelings such as despair, doubt, and panic—emotions based on survival logic.[21]

Necromancy is the study and use of magic to raise and control the dead.[25] The manifestation of Death magic, it has many functions. Masters of this tainted field of magic can conjure festering diseases, harness the shadows into bolts of incendiary energy, and reconstruct the flesh of undead creatures, allowing them to function again even after the foul monsters have been destroyed.[26]

The energies of Life, commonly known as nature magic, promote growth and renewal in all things.

Blood magic is a form of tortured life magic that uses blood as a power source.[27][28]

Druids maintain a deep connection to nature through the Emerald Dream, a primordial realm that encompasses all aspects of nature.[7]

Spirit, or Chi as the pandaren call it,[29] is the life force that shaman manipulate.[30] Spirit energy is intrinsically linked to the elements—earth, air, fire, and water. This life-giving force interconnects and binds all things in existence as one.[31] Shamanism is a deeply spiritual form of elemental magic that involves a connection with both the natural and spirit worlds. Shaman do not normally enslave elementals, but honor them, asking the elements to heed their call. Shaman are not inherently imbued with magic—they harness the powers of the elements through ceremonial totems.[7] Shamanism is also practiced by some of the draenei who learned shamanism from the orcs of Draenor.

Geomancy is a crude form of shamanism.[32]

Voodoo is a dark and powerful form of magic practiced by the troll shadow hunters, hexxers, and witch doctors. They use mojo in their voodoo.

Runic magic is a magic that employs runes. The Vrykul practice a runic magic that even the most experienced wizards find unfamiliar.[33] The runes can access various types of magic, such as fel, void, arcane, and death.[34]

Two categories of magic exist, arcane and divine. Divine magic contains druidism, shamanism, voodoo, and holy light, as well as other religions. Nature is a subcategory within the divine, but a form of it can also be found in arcane as well. Runes are mystically ancient, it is a type of arcane magic, but accessed by more natural means (see Runemasters and Inscribers).

Arcane, the most common form of magic, comes from the Well of Eternity, which itself draws from the Twisting Nether. Arcane magic is very powerful, but if not used carefully can cause corruption and great destruction.[35] . Used by mages, wizards, and other sorcerers, such as those of the Kirin Tor, arcane magic is ever present in the atmosphere and accessible to any who are capable of drawing upon its energies. Arcane magics were discovered by the kaldorei and later refined by the high elves of Quel'Thalas and the human nations, and are most commonly practiced by mages.[36][37]

Fel energy is arcane magic at its most corrupt. If arcane magic is an addiction, fel magic is the embodiment of the drug at its purest form.[38]

Necromancers are capable of reviving living creatures from death to do their bidding as undead servants.[39]

Druids derive their power from the earth itself, although they do not require totems to channel energy like shamans. They become agents of nature itself, forming a bond with all beings of nature and pulling their strength directly from that bond.[40]

The practice of divination and elemental combat native to several humanoid races of Azeroth. It is similar to shamanism in that disciples of geomancy wield the powers of the earth and encourage respect of earth’s spirits. The main difference between a geomancer and a shaman is the method through which the trust of the elements is gained. A shaman speaks directly with the elemental spirits, whereas a geomancer uses rituals, songs, and sacrifices to appease and propitiate the spirits.[41]

Runic magic was created by the titans. Their creation, the dwarves, quickly mastered the mysteries of the runes taught to them. However, as generations passed, the dwarves forgot their heritage and lost all knowledge of runes and their hereditary powers.

Tauren in Kalimdor rediscovered the power of runes. An ancient race as well, the tauren remembered the myths of runecasting and revived interest in this nearly lost art. The dwarves that came to Kalimdor with Jaina Proudmoore's Alliance Expedition learned tauren runecasting techniques. Tauren and dwarves do not share good relations, but they were eager to share knowledge of runes and titan myths.[42]

Voodoo is a strange tribal mix between the power of arcane and divine magic,[43] practiced by witch doctors and shadow hunters. They often combine reagents in a cauldron to create strange brews that most often result in bizarre transformations when consumed. They are widely known for placing hexes to morph victims into various creatures or placing curses.[44][45] The majority of voodoo users are trolls, although other races of the Horde have taken up the craft.[46][47]