Dissension is Chapter Eight of the Warcraft III human campaign, The Scourge of Lordaeron.

Early the next morning at Arthas' new base camp...

Upon returning to their base camp both Arthas and Muradin learn that the Alliance forces were being recalled to Lordaeron by King Terenas, who was convinced to do so by Uther the Lightbringer. Knowing that he couldn't defeat Mal'Ganis without his men, Arthas and a reluctant Muradin set out to destroy the naval ships to prevent the rest of the Alliance from returning home. As the Alliance cut their way through the woods, Arthas was forced to hire mercenaries in order to fight through the undead and burn the ships. Arthas's mission would be successful and his men would finish hacking through the woods just in time to see the last ship burning. With his men dismayed at being unable to go home, Arthas would blame the mercenaries for burning the ships and led the charge against them himself.

Lord Uther has ordered that your expedition be recalled. To prevent your men from abandoning the hunt for Mal'Ganis, you must burn their ships before they reach the frozen shoreline.

A Zeppelin arrives at Arthas' base and drops off an Emissary and two Footmen. They approach the Captain, who is standing with his men around a campfire.

Captain: I apologize, emissary, but the prince is away on an errand. What brings you to this desolate place?

Emissary: By royal edict, you men are to return to Lordaeron immediately. Lord Uther has convinced the king to recall this expedition.

Captain: We're to just pick up and leave?
The Emissary sighs.

Emissary: That's correct. My men report that the roads from here to the shore are held by the undead. You'll need to find an alternate route back to your ships.
The Captain turns to his Footmen as the Emissary takes his leave.

Captain: To hell with the undead! We'll cut our way through the woods, men!
The Footmen run off to the south. Sometime later, Arthas and Muradin arrive to the scene from the north.

Arthas: Captain, why are the guards not at their posts?

Captain: Well, milord, your father had our troops recalled at Lord Uther's request.

Arthas: Uther had my troops recalled? Damn it! If my warriors abandon me, I'll never defeat Mal'Ganis. The ships must be burned before the men reach the shore!

Muradin Bronzebeard: Isn't that a bit much, lad?

Arthas: Burned down to their frames! No one goes home until our job here is done!

Arthas: We'll need more men to fight our way through the undead.

Muradin Bronzebeard: I've come across a few mercenary camps up here. Perhaps we can hire a few of them?

Arthas: Damn Uther for forcing me to do this!

Arthas: Very good! But there are still more ships to deal with!

The Captain and the rest of Arthas' forces finish cutting their way through the woods and come upon the scene of the prince and the burning ships.

Arthas: Quickly, my warriors! These murderous creatures have burned our ships and robbed you of your way home! Slay them all in the name of Lordaeron!

Knight: Kill them all!
The mercenaries are killed by Arthas' men.

Footman: Our ships are ruined. What will we do now?

Arthas: Listen to me, all of you! There is no way home for any of us, save through victory! In this land we will stand or fall together. Now, return to the base and man your posts. 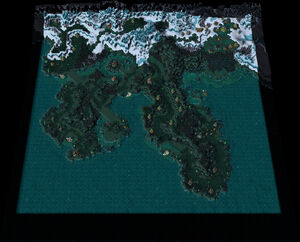