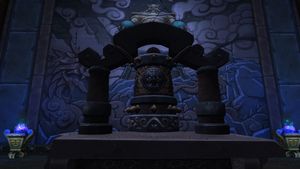 The Divine Bell in the Ruins of Korune. 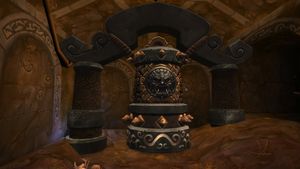 The Divine Bell in Darnassus. 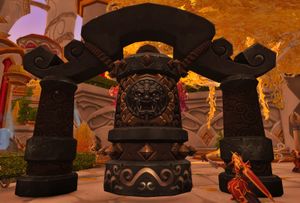 The Divine Bell in Silvermoon. 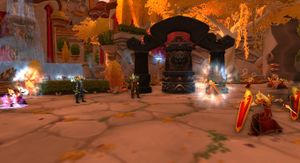 The Divine Bell in Silvermoon City, shortly before falling into Garrosh Hellscream's hands. 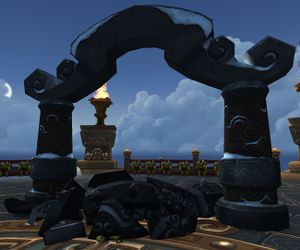 Shenqing, the Divine Bell, is an ancient mogu artifact and a quest item.

In the one-hundred-and-seventieth year of the Thunder King's reign, the Korune spellweavers came to Lei Shen with their greatest creation. A bell cast from the maker's flesh, shaped by stars' fire, and bound by the breath of darkest shadow. This bell, when rung, could shake the world and call to the heavens. Taken to war, the bell's cacophonous tones stirred the hearts of Lei Shen's warriors. It fueled their hatred and anger, lending them strength on the field of battle. The bell’s screaming voice struck fear and doubt into the hearts of the Emperor's enemies, sending them fleeing in his path. Awed by its power, the Thunder King described the instrument as "the voice of the gods," and named it Shenqing, the Divine Bell.[1]

Presumably after the pandaren created the Harmonic Mallet as the counter to the Bell, the monks stole the Bell from the mogu and used the two together to create pure harmony.[2]

After the death of Lei Shen, the mogu managed to steal back the Divine Bell,[3] which was then taken to a crypt, ready for the day that the Thunder King would return. With Shado-Pan trackers hot on their trail, Shan Kien sacrificed his workers and the rest of his warriors so that their ghosts would guard this crypt for all eternity.

Recently, the night elves of Darnassus found the Bell and moved it to their capital for study and safekeeping, only for it to be stolen by Horde agents and ending up in the hands of Garrosh Hellscream. The Bell was eventually shattered during a showdown between Garrosh and Anduin Wrynn.

The Divine Bell being "cast from the maker's flesh", as well as the large wounds on Ra's body, together imply that it was literally made from Ra's flesh.