"As long as one voice is left to lift in prayer, the song will never fade." —Yuna Sunridge[1]

Divine Hymn is a channeled level 76 Holy priest multi-target healing ability that heals 100% more outside raid groups. In addition, it grants a 10% increased healing buff to those targets for 8 seconds. 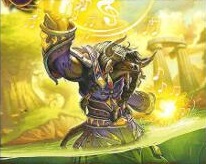 Divine Hymn is a common priest spell in the The Witchwood expansion for Hearthstone. The flavor text reads: "Taken up an octave, it's highly effective against stained glass golems."