Divinius is a draenei paladin and a prominent member of the elite Light's Chosen. She and the other Chosen serve under the direction of Prophet Velen, leader of the Exodar draenei, and have fought for their people and the Light in several important conflicts, beginning with the Battle for the Exodar. The Prophet is often seen to deliver orders directly to Divinius herself, implying her seniority among her comrades.

The Light's Chosen would be formed from six of the most skilled paladins among the draenei of the Exodar, sometime around or before the Burning Legion's third invasion of Azeroth. A founding member, Divinius and her fellow paladins confronted one of their first challenges when the Legion directly attacked Azuremyst Isle and the Exodar. In what would become the Battle for the Exodar, the draenei doggedly resisted the forces of High General Rakeesh, who sought the Light's Heart.[1] 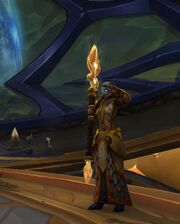 Along with Prophet Velen, Divinius and her fellow Chosen would lead the defense against the demons, while protecting the Exodar's civilians within the Vault of Lights. When the tide eventually began to turn against the Rakeeshi, the Light's Chosen struck out and routed the remaining demons from the city. Though the battle ended in victory for the Light's Chosen and the draenei, the death of the naaru O'ros would prove a major loss.

The Light's Chosen would join Velen and many other draenei onboard the Vindicaar to begin the Argus Campaign. Divinius and the Chosen stationed themselves on the vessel's bridge, where they were in close proximity the Prophet and the Crown of the Triumvirate. After the victory over the Burning Legion, Divinius left the Vindicaar and accompanied Velen back to the Exodar with the other Chosen.

During the Fourth War, Divinius served as a personal bodyguard to Velen. She and her fellow Light's Chosen Jost would accompany the Prophet during a meeting with Anduin Wrynn and other Alliance leaders in Stormwind Keep, shortly before the Battle for Darkshore.[2]