Do a Barrel Roll! (quest) 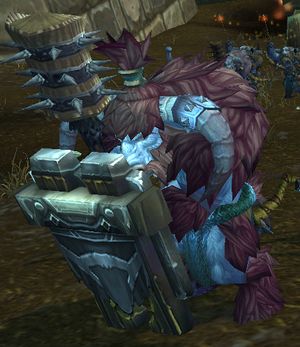 Pick up a keg near Lao-Chin, roll it downhill at the yaungol, and ignite it near them to destroy 4 Osul Treelaunchers and 50 Osul Invaders.

When I trained as a Brewmaster, I didn't expect to use my knowledge like this...

Did you know beer catches fire when lit? Well, with yaungol oil mixed in, it's downright explosive.

I've mixed the oil in with these kegs. Roll them at the yaungol over by the gate, and ignite them when you get close.

It'll take a few seconds for the keg to blow, but when it does...

Well, let's just say I wouldn't want to be over there.

Which is why I'll be over here. Mourning the loss of this brew.

Wha? I was just thinking about my poor, poor beer...

Whoo, that was an explosion! Several, in fact.

Sad my beer had to go, but at least we're safe, for now.

Run east a few yards and interact with the Keg Bomb. It starts rolling down the hill and has one ability:

Trigger the keg a few seconds before hitting a huge group of yaungol and a catapult or two. Note that the direction of the keg is controllable by using mouselook or the arrow keys, so use that to get the best possible positioning.