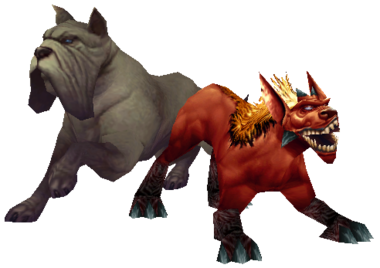 In World of Warcraft, a number of creatures share the appearance and/or role of dogs. In particular, the hunters of many races can tame wolves and associated beasts for use as pets or tracking hounds. Darkhounds are in fact demonic dogs, and are used as guard dogs by the Dark Iron dwarves in Blackrock Depths.

Dogs are found throughout the Eastern Kingdoms, Kalimdor, and Northrend.

Dogs are a popular pet among even non-hunters, however, these aren't your cute little pugs. The beasts classified as dogs are mastiffs and darkhounds.

Fairly small dogs can weigh between 20 to 50 pounds in weight. Dogs generally hunt in packs, chasing and exhausting prey until they can drag it down. They can jump fairly well, and survive well when tracking by scent.[1]