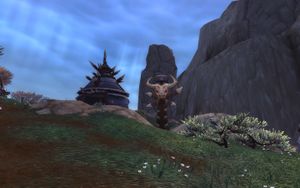 Dominance is a wood-panel scroll leaning against a large yaungol totem found at [65.4, 50.0]

in the upper level of Fire Camp Osul in Townlong Steppes, not far from Battat and Urang.

[The Song of the Yaungol].

Only the strongest, most courageous, most resilient of yaungol may lead the tribes. These traits are of the highest qualities in yaungol society, and are expected of all yaungol leaders.

However, with the constant threat from the mantid to their south, the yaungol cannot afford to lose a single warrior in an internal struggle for power.

A surprisingly civilized solution to this problem has been put into place. When a dispute arises between two yaungol, a banner is placed beneath them. They then fight one another with blunted weapons until one yields or passes out.

Similarly, new leaders are chosen in ritual combat: a yaungol who aspires to take the place of chief must place his family banner and fight any who would challenge his authority.