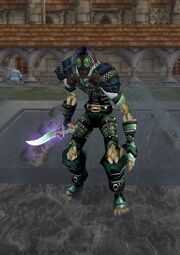 Dominic was a a level 60 elite undead rogue who was infiltrating the Scarlet Monastery. He could be found in the Library, Armory and Cathedral wings of the Monastery. Despite the fact he looks like a Forsaken, he gives quests to both Horde and Alliance players.

[Compendium of the Fallen]. He was also able to discover that the now undead High Inquisitor Fairbanks was in the Monastery and asked adventurers to kill him.

His quotes ('No questions asked') also imply he's not working for Sylvanas Windrunner.