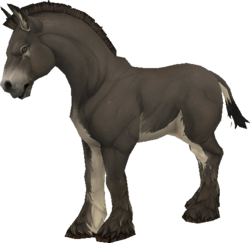 Donkeys are beasts of burden similar to mules. Orcs in the Horde are known to cook and eat them.[1]

Donkeys are one of the best pack animals around. A donkey is stolid in the face of danger, hardy, surefooted and capable of carrying heavy loads over vast distances. Unlike horses, they are willing (though not eager) to enter dungeons and other strange or threatening places. Donkeys may graze to sustain themselves, but owners often provide feed for them (such as oats) because it provides a more concentrated form of energy, which is better, especially if the animal is exerting itself.[2] A carrot on a stick may be used to spur a donkey.[3]