Doom Lord Kazzak is a level ?? (boss) elite demon located at the Throne of Kil'jaeden, a mountain on the northern edge of Hellfire Peninsula in Outland. Originally known just as Lord Kazzak, he was once located in the Tainted Scar in the Blasted Lands. However, Kazzak found an artifact to reopen the Dark Portal and traveled through the portal to Outland, where he now commands the Burning Legion's war effort in Outland in the name of his master, Kil'jaeden. Lord Kazzak's replacement on Azeroth after the re-opening of the Dark Portal is Highlord Kruul, one of Kazzak's minions. 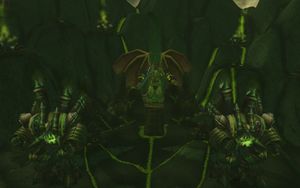 Kazzak and his Deathforge Automaton guards at the Throne of Kil'jaeden.

Doom Lord Kazzak's abilities are the same as those when he resided in Azeroth, just with higher damage.

For groups that lack the DPS to kill Kazzak in 1 minute:

In order to do this, you will need at least two Paladins; three or more are sufficient. Engage Kazzak normally and watch the raid's HP. When he is about to enrage (usually at 15 seconds left), have the whole raid move away from him, except for the main tank and the Paladins. Once Kazzak enrages, have the Paladins use their shields and start overhealing the tank. The shields should last until the enrage is gone. Then, the rest of the raid can move in again and continue DPS. Shamans should save Bloodlust/Heroism until this point. You'll have to kill him this time; it's not very likely that you will survive another enrage. If your Paladins are not very well-equipped, the main tank should use Shield Wall when Kazzak enrages. Still watch the raid HP and dispel twisted reflection.

Alternatively, you can simply survive his Enrage, as the damage can be resisted and absorbed. Simply stack enough stamina gear and buffs to get everyone to around 9k and pop healthstones and/or potions during the enrage.

Spawn
I remember well the sting of defeat at the conclusion of the Third War. I have waited far too long for my revenge. Now the shadow of the Legion falls over this world. It is only a matter of time until all of your failed creation... is undone.

The universe will be remade.