From Wowpedia
(Redirected from Doom guard)
Jump to: navigation, search

For other uses, see Doomguard (disambiguation).

The doomguard or doom guard[2] (sometimes pluralized as doomguards[3] or doom guards)[4] are a type of demonic warrior of the ered'ruin species that used to work as Archimonde's personal escort,[2] and serve the Burning Legion with great fervor.

Powerful and deliberate, these winged aberrations are known across the cosmos for their brutality. The doomguard are utterly devoted to their pit lord masters and revel in the destruction of worlds.[5] 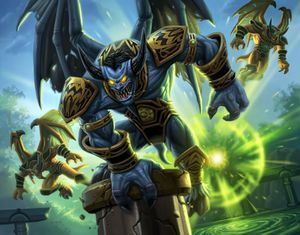 A group of doomguard during the War of the Ancients.

Before Sargeras freed them, the doomguard were the titan's hounds forever enslaved to police the use of arcane magics. Sacrificial magic was considered the greatest violation of life and the doomguard were attuned to instantly punish those who delved into such sorcery.[6] After freeing the doomguard, Sargeras recruited them into the Burning Legion[6] as enforcers and shock troopers.

They arrived for the first time to Azeroth during the War of the Ancients, where the doomguard were used to keep the warriors in line. While flying above the ranks of every regiment, they watched for disorder, ready to correct their brethren with a quick flash of a whip.[7]

During the Third War, they participated in the invasions of Lordaeron and Kalimdor. Notably, they hunted Tyrande Whisperwind in Ashenvale on orders of Archimonde and commanded shades of the Scourge.

Doomguard are huge, winged figures with blazing green swords, molten armor, and cloven feet.[8] They are taller and more intelligent than their demonic brethern, guiding them from above while flying with their wings of fire.[9] The doomguard are cunning beings and can see through mist far better than their foes.[10]

With their savage weapons and horrific faces, the doomguard is a terrible foe to confront and behold.[11] These monstrous, fiery warriors are said to be nearly immune to magic and can defeat entire armies with their sheer strength alone.[2] However, the War of the Ancients trilogy showed that they are indeed vulnerable to magic, as demonstrated by magic-wielding characters. 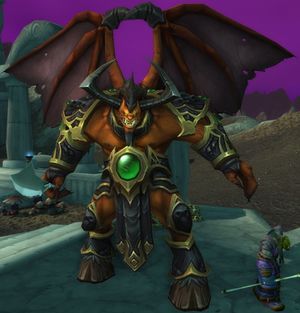 * Referred to as a doomguard but is depicted as a terrorguard. 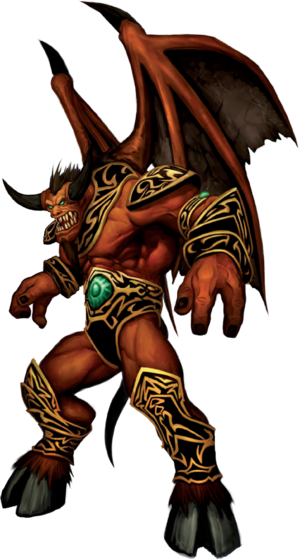 Doomguard art from the Monster Guide.

When mortals recall the brutal terror of the Burning Legion's armies, they would likely think first of the doomguard. These ironfisted demons serve as the Burning Legion's captains and generals. Countless worlds have fallen to their brilliant and ruthless military tactics. A doomguard's prowess at commanding large-scale battles does not reduce the demon's hunger for personal combat. In any conflict, a doomguard brings their powerful demonic abilities to where they can do the most damage, viciously slaughtering enemy troops. While most doomguard remain unquestioning and loyal servants to the lords of the Burning Legion (nathrezim and pit lords, among others), some ascend to this tier of command themselves and are among the most powerful demons in the Legion. In fact, most demons that remain in Azeroth after the failure of the second invasion are now under the control of various doomguard lords, ruling from such places as Jaedenar, Mannoroc Coven, and the Tainted Scar.[15]

The fearsome doomguard once served as Archimonde's personal escorts. Although they were often called upon to perform a number of duties for the Legion, their loyalties lay with him alone. The doomguard were left to their own devices after Archimonde's defeat at the World Tree on Mount Hyjal. They now roam the universe serving as mercenaries for whoever will have them. They enjoy wearing large breastplates emblazoned with the symbol of Archimonde despite his defeat. They believe he will one day return to rule them once more. Despite their appearance and disposition, doomguard are sought after for service. These monstrous, fiery warriors are nearly immune to magic and can defeat entire armies with their sheer strength alone.[16] 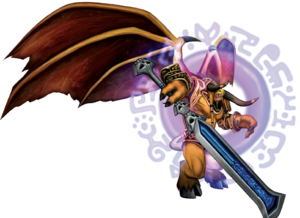 Doomguard begin a battle by sizing up their foes. A doomguard generally uses shadow strike and unholy aura before entering combat, and focuses first on what it considers the most dangerous opponent, which is usually a spellcaster. It uses shadowburn or its quickened immolate to finish that opponent. After one enemy is down, the doomguard focuses on the second biggest threat, picking off each opponent one by one. It may also use area attacks such as rain of fire or hellfire, especially if the doomguard is accompanied by allies that are immune to fire damage, possibly showing concern for the survival of their allies.

They cast deeper darkness if they believe their opponents will not be able to see through it, covering their actions while they cast additional spells. Fire storm is their first choice against seemingly powerful opponents who might not be ready with abjurations against fire. A doomguard will even cast fire storm with itself in the area, taking advantage of its immunity to fire. Detect magic determines if greater dispel magic would be useful against particular opponents. Doomguard will cast immolation as soon as possible when facing multiple opponents who may not be immune to the flames or if opponents may try to use cold attacks against them. When there is enough time to prepare even more spells, doomguard cast unholy aura and dispel good on themselves. They follow these actions up by wading into melee.

When two or more doomguard work together, one will engage in melee while the others cast cripple on potentially dangerous melee foes. After that, they prefer to split up and engage separate melee targets. They doom stomp when faced with two or more opponents in range who might be dazed and knocked prone by the effect. They almost always doom stomp when faced with four or more potential targets in range. If the battle is going poorly, a doomguard will cast demonic doom on a remaining melee foe. Doomguard usually try to teleport without error to disengage once injured enough. They cast spells from a distance while their allies continue the fight. Once all doomguard are injured enough they all teleport without error to escape. If the battle is going well, doomguard take their time finishing off opponents. They cast unholy blight to watch and be amused as their foes are sickened by the effect.[16] The doomguard are often armed with falchions, but individual doomguard have also been known to also favor scimitars, longswords, or greatswords (most of them similarly enchanted).[15]

Most doomguard are members of the ered'ruin race, who once served as Archimonde's personal escorts. Although they were often called upon to perform a number of duties for the Legion, their loyalties lay with him alone. The doomguard were left to their own devices after Archimonde's defeat at the World Tree on Mount Hyjal. They now roam the universe serving as mercenaries for whoever will have them. They enjoy wearing large breastplates emblazoned with the symbol of Archimonde despite his defeat. They believe he will one day return to rule them once more. Whether or not this will happen is a matter of opinion, but the fact remains that thousands of Doomguard still serve the Legion under Kil'jaeden's command. Unlike the felguard or many lesser demons, the doomguard have intelligence on par with most of Azeroth's major races, and are most often used as taskmasters to keep the felguard and infernals in line. A typical doomguard stands about 10 feet tall and weighs about 4,000 pounds, though some become much larger. Doomguard speak Eredun, and many also speak one or more languages of the mortal races as well.[15]

The doomguard is a demonic minion available to warlocks, summoned through the

[Summon Doomguard] ability. Since Mists of Pandaria, they can be replaced with a Terrorguard using the