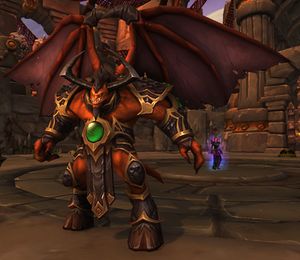 Once they served Archimonde: now they serve any that can control them.[1]

The Doomguard is a temporary demonic guardian minion available to Demonology warlocks. It has a low probability of spawning only if the talent

[Doom] is the killing blow on a target.

The Doomguard lasts for 25 seconds once spawned. Because it is a low probability occurance on an already difficult to achieve event (killing a target with Doom), it cannot be relied upon and exists more for class fantasy than any actual notable damage source.

The Doomguard's single ability is

[Doom Bolt], which is cast on the warlocks' current target. Like all warlock minions, it also benefits from

[Ritual of Doom]. Curse of Doom, when dealing the killing damage to any mob that granted experience, would summon a Doomguard. However, the summoned Doomguard was not under the warlock's control, and would immediately attack the warlock upon spawning. The Doomguard was quite capable of killing the warlock and his allies, and had to be enslaved via

[Enslave Demon] in order to control him, although he could resist enslavement, or break free later on and begin attacking the warlock again.

Alternatively, Ritual of Doom could be used to summon a Doomguard, albeit by sacrificing the life of a random party member. The Doomguard summoned from the ritual was automatically under the control of the warlock for 15 minutes, and despawned after that time. The spell was later changed so that party members did not die outright from the summoning.

These two summon sources were removed in the Cataclysm expansion. In their place, the ability

[Summon Doomguard] was added as a single-target summon with a 10 minute cooldown. At the time, it would only attack targets with

[Bane of Agony] or

[Bane of Doom] on them, and would cease attacking if no targets had one of those two debuffs. In the Mists of Pandaria expansion, the reliance on Bane of Agony or Bane of Doom was removed, instead attacking the warlock's current target for the duration. In Legion, Summon Doomguard's cooldown was reduced to 3 minutes and it became the primary single-target DPS cooldown for warlocks for all specializations, sharing a cooldown with

[Summon Infernal] (which was used as an AoE cooldown). The Doomguard was also available as a permanent pet option via the talent

[Grimoire of Supremacy], available to all 3 specializations.

In Battle for Azeroth, Summon Doomguard was removed entirely in favor of specialization-specific demon cooldowns, and the Doomguard itself was restored to a spawn from Doom killing blows, though now a low probability spawn rather than a guaranteed spawn as it was originally from Curse of Doom.