This article is about the lore and history of the weapon. For the artifact, see

[Doomhammer]. For the warchief, see Orgrim Doomhammer. For his father, see Telkar Doomhammer.

Doomhammer in the BattleCry Mosaic.

“It is called the Doomhammer because when its owner takes it into battle, it spells doom for the enemy.”

The Doomhammer is a powerful hammer that was crafted long ago in a pool of elemental lava[2] on the orc homeworld of Draenor. It is a namesake relic passed down from father to son,[3] and was given to Thrall as a testament of faith and honor during the salvation of the orcs.[4] Although the hilt of the hammer has been replaced, the actual hammerhead itself has endured as a testament of the crafter's skill.

Despite its name, Doomhammer is a weapon of good, bringing doom to enemies and upholding the family's honor.[3] The head of the hammer was forged in a pool of elemental lava on Draenor[2] by an orc named Gelnar. When Gelnor crafted an oak handle for the weapon, the Doomhammer was complete. Both the hammer and the name was then passed down from father to son for generations[5] until it was passed to Telkar Doomhammer, father of Orgrim Doomhammer.[3]

Young Orgrim came to admire the hammer, knowning one day it would be his own.[3] In a meeting between Orgrim, Durotan, and the draenei prophet Velen, Orgrim told of a prophecy about the Doomhammer saying that "The last of the Doomhammer line will use it to bring first salvation and then doom to the orc people. Then it will pass into the hands of one who is not of the Blackrock clan, all will change again, and it will once again be used in the cause of justice."[3]

As is the nature of such prophecies, the orcs did indeed fall, all due to the manipulations of Gul'dan and Kil'jaeden. After using it in the First and Second Wars, Orgrim, last of the Doomhammer line, passed the weapon on to his protégé Thrall, the one who redeemed the orcish race and completed the prophecy.

Through blood the weapon shall pass, as surely as night begets day, Until the elements cry unheard, and pride turns to unbridled rage. The last of the line shall deliver salvation and doom upon his kind. Honor will be undone and all will be lost, before it is found again. A stranger will raise the hammer high, and with it justice shall reign.

All of the Doomhammer bloodline's successors bore this ominous prophecy on their great shoulders, divined long ago by the Blackrock clan's elder shaman. Yet for generations, these tidings of doom went unfulfilled. The legendary Doomhammer weapon became a standard of pride and honor, its immense black stone as indomitable as the orcs' fierce spirit.

When the heirloom passed to Orgrim Doomhammer and the mighty Orcish Horde rose to power, the weapon met no equal in battle. Innumerable foes suffered its wrath, the warhammer even shattering Sir Anduin Lothar's fabled rune-etched blade of Stormwind before crushing the human's skull.

Only too late did Orgrim realize that he was the harbinger of doom prophesied by his clan's ancestral shaman. Although he had slain the power-hungry Horde warchief Blackhand and many of the depraved warlocks who had destroyed the orcs' culture, Orgrim's people were ultimately defeated, and most of them were rounded up in human internment camps to live out their days in shame and lethargy.

The prophecy, however, had not yet run its course. So it was that Orgrim, mortally wounded while fighting to free his people from imprisonment, bestowed the Doomhammer on one who was not of his clan or bloodline: Thrall. Wielding the hammer as a symbol of hope, the young orc liberated his race and rekindled the pride and heritage that the orcs had abandoned as the bloodthirsty Horde.

The image of a wolf was later added onto the Doomhammer to denote Thrall's hereditary ties to the Frostwolf clan, but little else has changed about the weapon. Through war and peace, the hammer has remained at Thrall's side, an embodiment of his race's strength as it was in ancient times, and a symbol of doom to the enemies who would dare threaten the orcs' freedom and honor.

During a battle at the Heart of Azeroth, the Doomhammer falls from Thrall's grasp and into the Maelstrom, where it lands in Deepholm. After it is retrieved by Thrall, Stormcaller Mylra, and the new Farseer of the Earthen Ring, Thrall gives it to the Farseer and leaves to think. Mylra wonders if the Doomhammer's prophecy was in fact about the Farseer, not about Thrall.[6]

The hammer remained in the leader of the Earthen Ring's possession and was used in tandem with other legendary artifacts and heroes to combat the Burning Legion. It was used to seal the power of the Sword of Sargeras after it was stabbed into Azeroth alongside the other gathered artifacts that the heroes of Azeroth had found to combat the demons. Drained of its mighty power, it is unknown as to the fate of the Doomhammer after this; as the Farseer either kept it or discarded it as another artifact was.

As a young orc, Orgrim described the Doomhammer to Velen as an enormous hammer with a black, blunt, and powerful stone;[1] the shaft made of carefully crafted oak wood.[5] Over the years, the shaft had had to be replaced, but the stone itself had never been chipped.[1]

Tony Swatton of Man at Arms was commissioned to create a real-life version of the artifact skin Blackhand's Fate for Blizzard. The head is 16" long with 10" square faces, and a 22" oak handle. If it was solid metal, Swatton estimated it would weigh in at 250-300 lbs. 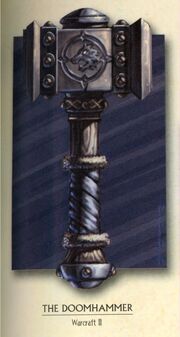 The appearance of Doomhammer has changed over time. When it was first depicted in the Warcraft II manual, it bore a jagged blade at the end and two spikes on each side. By the time it was passed onto Thrall in Lord of the Clans, these blades and spikes had been removed.

After the weapon was passed to Thrall, the wolf's-head symbol of the Frostwolf clan was added to the hammer's formerly plain head. This symbol can be seen in the cinematic where Thrall and Grom Hellscream battle Mannoroth (it most visible just before Thrall throws it at Mannoroth when it glows brightly).

This greathammer is composed of solid granite on an oak handle. The granite is wrapped twice around with gold-studded leather.[7]

The Doomhammer had a unique, black metal appearance. Within the game files, there was an unused Doomhammer model which resembled the hammer shown in the Warcraft III cinematic.

During the PTR for patch 3.3.3, Thrall used the Doomhammer model instead of the previous look-alike hammer. When the patch went live, however, Thrall was given yet another plain hammer.

In patch 4.2, during the Elemental Bonds quest chain, the Doomhammer had the model from the patch 3.3.3 PTR.

In patch 4.3, Thrall was given an updated, seemingly smaller, version of the unique Doomhammer model.

After the Darkspear Rebellion defeated Garrosh Hellscream, Thrall intended to end the warchief's life with the Doomhammer, but he was stopped by Varian Wrynn.

Doomhammer is an artifact available to enhancement shamans in World of Warcraft: Legion.

After killing Garrosh, Thrall has been unable to use it properly as the elements have gone silent to him. During a battle at the Maelstrom, it flies out of his hands into the great whirlpool and down into Deepholm.