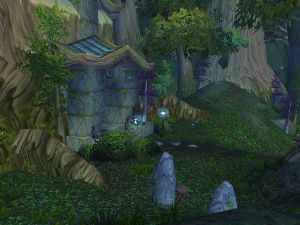 The Dor'Danil Barrow Den is located in Ashenvale, south of Splintertree Post, and southwest of Felfire Hill. Although it has traditionally been the site of rest for night elven druids, the incursion of the Horde put the barrow den behind enemy lines. Although the orcs had little interest in a bunch of sleeping elves, the Forsaken who later joined the faction were not so disinterested. Experimenting with severing the sleeping druids from their spirits, they drove the night elves insane. The barrow den is now filled with skulking Forsaken assassins, the enraged souls of the severed druids, and three particularly powerful spirits — those of Uthil Mooncall, Mavoris Cloudsbreak, and Taneel Darkwood.