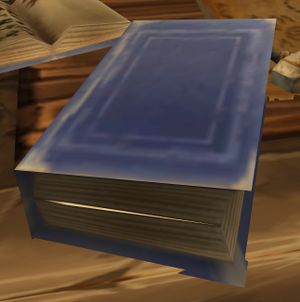 Doren's Logs are the writings of Captain Doren. It is found inside the Den of Defiance in Jade Forest.

We engaged a Horde fleet many times our number in a series of sporadic encounters throughout the night. Our losses were high, but we gave more than we got. We took advantage of a dense fog that cloaked our movements; no doubt they thought our numbers were much greater, hence they fled southeast by morning light.

We were astounded to discover a great cliff wall as the fog burned away. Land! It's not on any of our charts. I've messaged the Skyseeker in order to arrange for air support.

The Skyseeker has arrived and dispatched its gyrocopters. This is no mere uncharted island - we have discovered an entire continent! I will begin shuttling men and materials up the cliff walls immediately. From this higher ground, we will have a commanding view of the nearby seas.

Communication among the fleet is sporadic and confusing. The Horde seems to be everywhere at once; we have lost contact with Admiral Taylor's flagship, which likely engaged the Horde fleet we thumped a couple of days ago. Light help him; they were out or[sic] blood.

With no news from Stormwind, I am going to take the initiative and secure this land.

The Skyseeker has left behind a full complement of gyrocopters to help us construct a base. My men have claimed a series of abandoned ruins as a stronghold. The ruins and surrounding jungle are too dangerous for air traffic, we've been using some clearings to the south as a temporary airbase.

This morning we made our first contact with the natives. They are pandaren! I didn't think they were real. Could this be some sort of mythical pandaren homeland?

The pandaren are full of questions, but no help at all. I admit I'm feeling immensely uneasy, and I can't put my finger on why. It seems like all of my doubts are magnified here. The Horde will come back; I am certain of it. How many will come? Will they come by sea or by air? I must be ready!

The men are working double-time with half rations. The pandaren have offered food in trade but are not interested in Stormwind promissory notes and laugh at the quality of our steel. For some reason, this makes me furious. Do they know that they are about to be in the middle of a battlefield?

The Skyseeker reported that it picked up Horde prisoners from an engagement at sea this morning, then suddenly fell silent. I fear the worst.

Actually, I fear a lot of things. We're alone here. Reinforcements from Stormwind are weeks away. Taylor's flagship is missing, and now the Skyseeker is silent. Are we losing the war at sea? Doubts churn within me. I can't think straight. I swear my skin is losing color. What is wrong with me?

Every day I scan the horizon for Horde airships. We are not ready. Our airbase is in shambles, with a half-complete tower. Some pandaren have offered to help, and I've drafted them.

Years ago, I once hunted down Colonel Kurzen when madness overtook him in Stranglethorn. I never understood his spiral into darkness until now. I am alone. At night I lie awake in the oppressive heat, and swear the shadows are whispering to me of my own demise. Must get that airbase finished. I'll clap the pandaren in manacles if I have to. The Horde... The Horde...

Woke up to news of a signal flare from off the coast. There's a shadow moving through the fog. A horde gunship?

I've dispatched a messenger to scramble the gyrocopters. They may not get here in time. Ordering everyone to the guns. This is it.

I feel overpowered with anger and dread. I am not myself. Perhaps in victory I will find solace?

If it is truly a single Horde airship, then they stand no chance. We will decimate them.