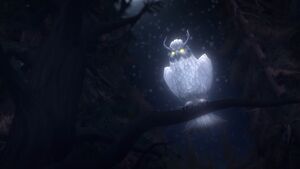 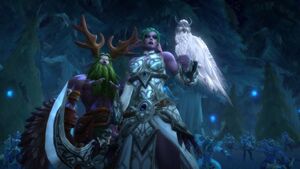 Dori'thur, Tyrande, and Malfurion assault the Horde base in Darkshore.

Before the destruction of Teldrassil, Dori'thur could be found flying in the Temple of the Moon of Darnassus. Dori'thur would aid Tyrande when she was attacked by the Horde, presumably to supplement the passive presence of Malfurion Stormrage, who would not aid in the attack.

Tyrande sent Dori'thur to seek out an Alliance adventurer and call them to Stormwind to attend a meeting between the night elf leadership and Anduin Wrynn.[2]

Dori'thur accompanied Shandris Feathermoon, Sira Moonwarden, and Maiev Shadowsong to search for Tyrande, and was used to reveal hidden Forsaken rogues at the location of Tyrande's crashed ship.[3] After Tyrande was found Dori'thur joined Tyrande, now powered by the Night Warrior, and Malfurion into Darkshore to battle the Horde.