Not to be confused with Dr. Wrenchly von Boom.

Dr. Boom is the former protégé of Lead Sapper Blastfizzle at Area 52. Previously known as Sparky Uberthruster, he refused to wear his protective nether helmet and over time became irradiated. He became known as Dr. Boom. He set up his camp northeast of Area 52 with a majority of the goblins' sapping equipment and has terrorized Area 52 ever since. Blastfizzle calls on adventurers of the Alliance and the Horde to destroy Dr. Boom and end his madness.

Dr. Boom is a non-elite quest boss with 654,000 hitpoints; he does not move or use ranged attacks, making him a popular target for casters and Hunters to test their DPS output, as well as a target for leveling up ranged weapon skill. This fight is sort of a mini-game where you have to dodge his Bomblings to get close enough to throw the provided bombs at him, although it is possible to climb or fly over the rocks that surround him and kill him from behind. It is also possible to stand just beyond the range of the Bombling spawns and attack him that way, standing on the cart filled with explosives for instance. 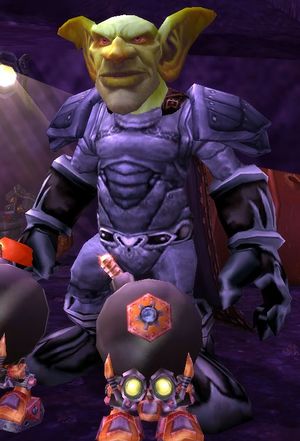 Previously, because Dr. Boom could not move to attack when pulled, standing on the rocks behind him and shooting down at him made him the best mob in the game to grind ranged weapon skill from. This is no longer true, as firstly Dr. Boom was given a normal ranged attack and then weapon skill was removed from the game.