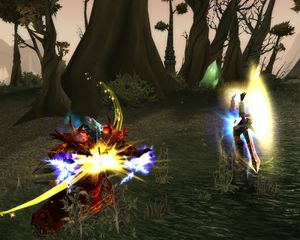 Please note: The following article was largely written prior to the introduction of the draenei as a playable race for World of Warcraft. It is kept for historical purposes, documenting the reaction of some of the player-base to the race's introduction as part of The Burning Crusade.

There has been confusion relating to the new lore for the draenei.

The revelation that they are an offshoot of the eredar was bewildering to some fans, as was the idea that Sargeras corrupted the eredar as opposed to the other way round. However, while Sargeras's corruption of the eredar is a retcon, it should be noted that the draenei-eredar relationship is not. Except in the case of the lost ones.

The Dimensional Ship/Tempest Keep was also controversial, as some fans considered the concept more at home in sci-fi than fantasy.

In a post on the World of Warcraft forums, Metzen apologized for the difficulties the new lore created, but stood by his revisions, believing that this version grounds the draenei and the eredar more firmly in WarCraft lore (he admitted that he simply forgot the eredar were already demons before they met Sargeras). Metzen also claimed that the new dimensional ship lore would not be too similar to science-fiction "spacecraft," with enough of a twist to make it work in a fantasy environment.[1] The ship does not travel through "outer space" (referred to as the Great Dark in Warcraft lore). It instead teleports between worlds using the Twisting Nether. Therefore it is inaccurate to say the draenei are in any way related to outer space.

It could in some ways be compared to the teleportation spells of the mage, on a much larger scale. Also, many are quick to forget that the ship is of naaru origin, and actually has little to do with the draenei. However, with escape pods and a great deal of in game information about flying the ship between worlds and crashing into the planet many players feel this is simply a cover up.

The most recent addition to controversy surrounding the draenei race has been the recent choice of Blizzard to allow draenei, an Alliance race, to become shaman (a class previously limited to Horde characters). As a matter of balance, they are allowing the blood elves, a Horde race, to become paladins (a class previously limited to Alliance characters). The decision for draenei to become shamans actually helps clarify the role of the shamans and the Elemental Spirits in the lore and the fight to stop the Burning Crusade.

In Warcraft III: The Frozen Throne, and the Burning Crusade beta, the race's name is pronounced with a short initial vowel sound and the accent on the first syllable: 'dra-nI. (see this guide)

In forum post on 6th October 2006, Nethaera has given the official pronunciation to be "dran eye". [1]

Various alternative pronunciations have also been heard or described:

The female playable draenei makes fun of the difficulty in pronunciation in one of her "/silly" quotes: "Why does everyone have trouble with the name of our people? It sounds just like it is spelled."

An article in Wired criticized the immense dimorphism in the species, asserting that female draenei more closely resemble blood elves than their own kinsmen.