This article is about the Draenic tree creatures. For their Azerothian counterparts, see ancient. For the animal demigods, see Ancient Guardian. 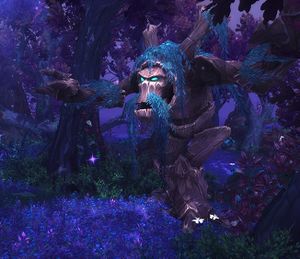 Draenor ancients are tree-like creatures native to Draenor, similar to the ancients of Azeroth.

It was only very recently that draenei rangari managed to communicate with these enormous sentient trees, but wildly different ways of life—not to mention a completely different perception of time—have made further interaction difficult. The ancients get their name from their analogues on Azeroth; they are tied closely to a prehistoric plant lineage that unites much of Draenor's flora and places them in opposition to the creatures of stone. These enigmatic ancients remain in the same area for hundreds of years and are reluctant to move unless their home is threatened. Adventurers should be cautious when harvesting the valley's lumber, as they may find the forest fighting back.[1]

Ancients tend to be guardians and tenders, but that does not make them any less dangerous. An enraged ancient is something to be behold. Taking a branch from one is a worthy deed.[2]

In Tangleheart, the botani use a special sap to quickly grow ancients to full size.[3] The botani known as Ontogen the Harvester imbues ancient saplings with anger and hatred towards creatures unlike them.[4] The "Ritual of the Charred" is a strange ritual wherein the full-grown ancients step into fire, burning the leaves from their branches and charring their bark.[5]

There once was a grove of ancients in either Gorgrond or Frostfire Ridge, its name forgotten. They lived there in ancient times before the destruction of Outland. Mosswood the Ancient is one of the last of these ancients.[6][7]

The appearance of Draenor ancients vary depending on their their environment; for instance, many ancients in Gorgrond have palm-like leaves, while the ones in Shadowmoon Valley tend to more closely resemble the willows commonly found in that area.