The Drag after the Cataclysm 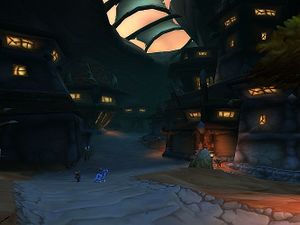 is an alley lined with shops[1] which links the Valley of Strength and the Valley of Wisdom in Orgrimmar. The Valley of Honor and the Cleft of Shadow can be accessed from the Drag. The shaded street is known far and wide for its myriad of vendors and profession trainers. Nearly every profession trainer can be found within the Drag, except for the First Aid, which is found at the Orgrimmar Embassy.

Prior the Cataclysm, the Drag abutted a canyon wall in a less than savory part of Orgrimmar. With the Cataclysm, however, the Drag physically shifted out of the shadows. Sunlight began illuminating the streets, and more reputable establishments began being built in the alley.[1]

After many parts of the city were burned,[citation needed]  the area was rebuilt, a few buildings were under construction. The orphanage that was once located in the Valley of Honor until it was destroyed has been relocated here and a small pond was made nearby.

Construction on one of the buildings was completed and ethereals took up residence offering their services to the Horde.

During his reign, Warchief Garrosh Hellscream disliked non-orcs loitering in the Drag.[2] 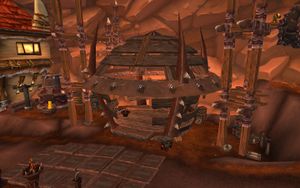 The ethereal building, when it was under construction. 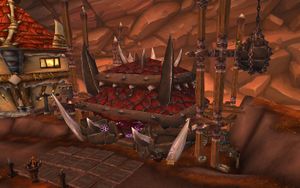 Building next to Droffers and Son Salvage

across and down from Borstan's Firepit