Dragons (known as nelghor in orcish[1]) are immense, powerful, winged reptilian creatures, created from proto-dragons by the titans and the Keepers to safeguard the world of Azeroth millennia ago. They are divided into several types called dragonflights. Since the fall of Deathwing, they have lost their titan-given powers as well as the ability to reproduce. They still remain powerful sorcerers, however.[2][3]

The proto-dragons were the ancestors of dragons before they evolved into the sapient, beautiful majestic creatures that they are known as today.[4] Brann Bronzebeard recently uncovered evidence, corroborated by reports from adventurers in Deepholm, that proto-dragons and dragons may have originated from elemental drakes (i.e, stone dragons and storm dragons).[5] Dragons share a common ancestry with both gryphons and wyverns,[6] but it is unknown how far back they diverged.

Galakrond, a massive proto-dragon,[7] is known as the "progenitor of dragonkind." It is said that it is from Galakrond the titans created the Aspects,[8] but this is a rumor the Aspects actively encouraged so as to keep the truth about Galakrond a secret from the dragonflights.[9]

At one time, their numbers were uncountable, but in present-day Azeroth there are very few left. Originally, there were many different dragonflights, with many different colors to be seen. The five most influential, however, were the reds, the greens, the bronze, the blacks, and the blues, and eventually most (if not all) of the other flights disappeared.

Chosen by the titans, each of the five dragonflights was given domain over a certain aspect of the world, ranging from the earth to time itself. During the War of the Ancients, the dragonflights sought to fulfill their duty and strike against the invading Burning Legion.[10] Over time, the dragons have endured much hardship and only a handful still remain, hostile to all that may tamper with the titans' creations.

The dragons of Azeroth are far more intelligent even than the humans who hunt them and struggle to reconcile their metaphysical nature with the reality of the savage world they inhabit. While each dragon is a powerful entity, dragons also represent the origins of the world and were given care over various parts of Azeroth's creation since time immemorial. Today, the dragons still remember their original natures and attempt to use their powers to continue their original purposes: for some, to shape stone and raise mountains; for others, to protect the forests or expand the realm of magic.[citation needed]

Many dragons are shapeshifters, able to change to a mortal guise at will. They do this for a variety of reasons, including fitting in smaller spaces, talking to mortal races or even for enjoyment,[11] notably because soft skin is more sensitive to receiving a loving touch than hardened scales.[12] Even if a dragon dies while shapeshifted into their mortal form, they remain in their mortal form.[13]

Dragon from the Warcraft II: Tides of Darkness manual. 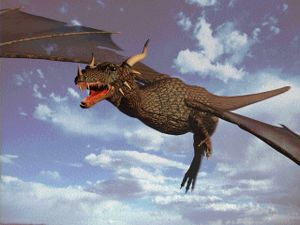 Dragons first appeared as a unit of the Old Horde in Warcraft II: Tides of Darkness. They were described as such:

Dragons are native to the untamed northlands of Azeroth. Reclusive by nature, Dragons have had little contact with their earthbound neighbors over the centuries. Rend and Maim, the Chieftains of The Black Tooth Grin clan, masterminded the capture of the Dragon Queen Alexstraza[sic] by the Dragonmaw clan. With their Queen held captive, these majestic creatures have been forced into subservience by the Horde - her progeny being raised by the Dragonmaw clan to slaughter the enemies of the Horde.

By combining their incredible destructive powers with a keen intellect, the Dragons represent the single most powerful force within the Horde. The devastating flame that issues forth from the mouths of older serpents can level any number of enemy troops, while their powerful wings allow them to tirelessly soar through the skies.[14]

Despite being depicted with green sprites, the dragons of Warcraft II were enslaved members of the red dragonflight as later lore developed.

In Beyond the Dark Portal the dragons of the Horde were being described as once having been enslaved but now continuing to feed upon humans, roosting at Blackrock Spire and being led by Deathwing.[15] Later lore changed them to being willing members of the black dragonflight.

On some melee maps dragon roosts were available to buy dragons. The colors of the dragons varied depending on the tileset of the maps. 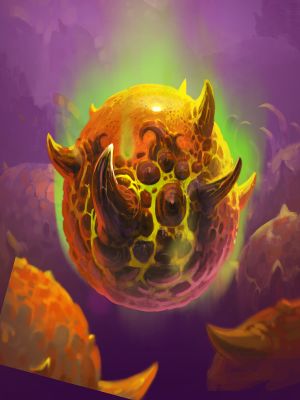 A dragon egg in Hearthstone.

Dragon is both the name for the race as a whole and the short title for the mature-aged dragon (aka "mature dragon").

Dragons are already conscious while in their unhatched eggs.[16] 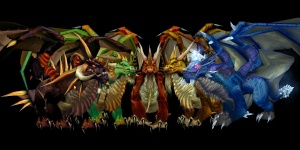 The titans chose a member of each of the five dragonflights to watch over Azeroth in their absence. However with the death of Neltharion, these roles are irrelevant; the aspects however still maintain great power and leadership:

The Aspects are aided in their tasks by their consorts, who are their companions, partners, and lovers. Typically, the consorts are chosen by traditional draconic courtship rituals; though a consort may be smarter or more powerful than the average dragon, only those loved by the Aspect will rise to the position. The consorts at any given time are led by the Prime Consort, the one who has held the position longest or is else the most capable. Typically, an Aspect would have three or four consorts at any time. 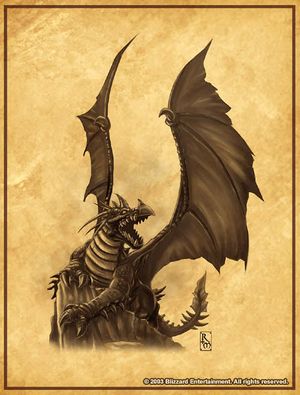 A dragon in the RPG.

A dragon is a reptilian creature, usually winged, with magical or unusual abilities.[17]

The dragons of Azeroth reach maturity after a mere hundred years have passed. They are very cunning and magical, using spells to complement their powerful physical capacity. Because each creature has an intimate connection with the world around it, the death of a dragon is never a simple thing; it is a metaphysical event, driven by the creature's natural connection to the spirit of the world. A dragon's death can cause massive upheaval in the natural surroundings — earthquakes, surface lava explosions, a new lake flooding forth from a sudden crack in the earth‘s crust, and so on. Even young dragons, those who have not established as close a bond to the spiritual world, still make ripples in the fabric of reality when they die. Although these ripples are not always seen or felt by other races, a young dragon's death nonetheless garners the attention of other dragons in the area — and creatures particularly attuned to the natural state of being that surrounds them.[18]

Dragons have a number of reasons for fighting; they are territorial, and numerous factions hunt them for a variety of different reasons. With the exception of black dragons, most dragons do not attack random groups of mortals on sight; although like mortals, each dragon has a different personality and some are more aggressive than others.

Each of the dragonflights fights slightly differently, but their overall tactics are relatively similar. Fearsome alone, groups of dragons are nearly impossible to combat; all five dragonflights are intelligent, and they use everything they can think of to their advantage. When possible, the dragonflights use dragonspawn troops to open the way into combat, allowing these ground-based troops to draw their enemies' attention while they strike from above or a distance. Even when bereft of dragonspawn support, dragons prefer to fight from the skies, resorting to melee only when necessary or when enraged. Dragons are highly intelligent and, due to their long lives, possess vast experience. Thus, they are excellent judges of when to call a tactical retreat. Yet if dragons decide that the cause is worthy, they will fight to the death for it, however hopeless the battle might be.

Blue dragons open combat with magic to disrupt their enemies, such as creating illusions or walls of force. Red and black dragons focus on offensive magic and breath attacks, using spells like chain lightning and blazing column to eliminate waves of weaker enemies. Green and bronze dragons use spells to allow them to maneuver around their opponents, or directly incapacitate their enemies; greater invisibility and charm monster are popular.

When facing a large group of enemies, dragons attempt to affect as large a group as they can with an individual spell or attack. In the battles against the qiraji a thousand years ago, dragons focused their efforts on taking down wave after wave of lesser qiraji with their breath weapons; the mortals had the responsibility of dealing with enemy commanders. This does not mean that if the opportunity presents itself a dragon won't take a bite out of an enemy commander; however, they are more likely to wreak as much havoc as they can than spend their time hunting a specific opponent.

When fighting against a single target, dragons use spells to complement each other; one dragon might serve as a healer or cast enhancement spells like brilliance aura, while another decreases their target's defenses with bestow curse and detrimental magic, while the third attacks directly. In this respect, dragons work together in ways similar to a mortal adventuring party, but due to their inherent abilities they can switch roles and last longer in an extended battle.[19]