From Wowpedia
(Redirected from Dragon Aspect)
Jump to: navigation, search 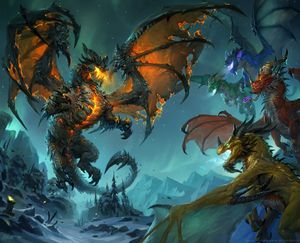 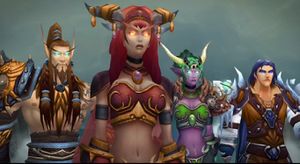 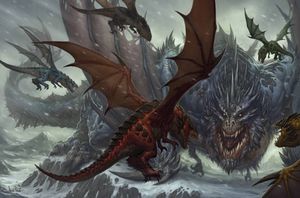 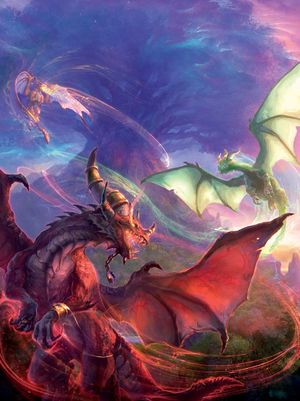 Aspects are more than just dragons with different skills and extra powers. When the titans blessed all of them, they gave them insights and other ways of understanding things. Until the creation of Chromatus barring other Aspects, no single dragon was able to defeat one.[11] Although they are parts of a whole and were never meant to be separate, they are also complete unto themselves as well.[1] The titans gift is also a burden. Neltharion felt every rock in Azeroth pressed down on him. His body splintered and cracked. It was beyond physical agony; his spirit was unraveling, suffocated by the unfathomable load. He saw it as a life of eternal torment. However with it came an incredible strength, as the weight of Azeroth was his to command.[12] 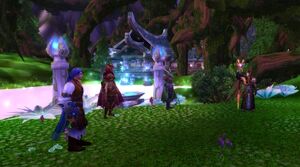 Proclaiming victory, the defenders of Azeroth briefly rejoiced at having finally defeated the Destroyer, but the celebration was short-lived. Deathwing rose from the Maelstrom, his body mutated into a mass of molten lava and tentacles. The final battle for Azeroth began in earnest, until one final blast from the Dragon Soul infused with the complete essence of each Aspect completely obliterated the fallen Aspect. With Deathwing truly defeated, the Aspects had fulfilled their duty of protecting Azeroth from the Hour of Twilight and the ancient powers granted to them by the Titans were expended; ushering in the Age of Mortals.[13][14] As such, they sacrificed their roles as Aspects.[15]

Fortunately, the Aspects are still true to the gifts given to them by the titans, as life, magic, nature and time last forever.[citation needed]

The powers of the Aspects coalesced in five scales that could be found in places important to the flights: the Nexus for the blue, Neltharion's Lair for the black, the Emerald Dream for the green, Vermillion Redoubt for the red, and an unknown location for the bronze. The scales were gathered by Alexstrasza, Kalecgos, Ebyssian in place of Deathwing, Merithra in place of Ysera who had died in the third invasion of the Burning Legion, and Chronormu in place of Nozdormu whose absence was not commented on. The essences of the five flights were used to empower the

[Heart of Azeroth], a relic created to heal the world after she was stabbed by Sargeras.

During an interview lead quest designer Dave Kosak explained that the Dragon Aspects stood in the spotlight because one of their own had gone bad. Now the Dragon Aspects will continue to be important and still be around, but they may not be central characters anymore. For example, Kalecgos has been elected shortly before the Hour of Twilight and, obviously, he is still a dragon and he is still a very powerful mage, even if he is not immortal anymore. And he will still play a role in the world and will advise the Kirin Tor, he is just no longer the Aspect of Magic.[17] The bronze dragons still can travel between time, but they no longer have control over timelines.[18] In the Age of Mortals, mortal organizations need to take over what was once the charge of the Aspects. So all the characters are still important and their story will continue, even if they are not in the spotlight for the next expansion.[17]