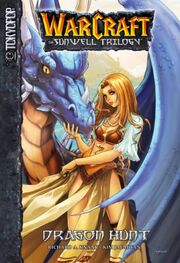 Dragon Hunt is an original English manwha written by Richard Knaak and illustrated by Kim Jae-Hwan taking place in the Warcraft universe. Dragonhunt is Volume 1 of The Sunwell Trilogy.

It's an epic quest to save the world of Azeroth from the forces of the Undead Scourge! Warcraft: The Sunwell Trilogy chronicles the adventures of Kalec, who has taken human form to investigate a mysterious power, and Anveena, a beautiful young maiden with an enchanting secret....

From the minds of Jae-Hwan Kim, artist of the best-selling King of Hell series, and Richard A. Knaak, the New York Times best-selling author, here is the Warcraft universe like you have never seen it before--The Dragon Hunt is On!

In the era after the Battle of Mount Hyjal, the world attempts to recollect itself from the onslaught left in the wake of the Burning Legion. The world thought it finally would be at peace. However, when an immense power emanates throughout the land all eyes turn in search of its source. Kalecgos, a member of a decimated race of blue dragons quests towards the elven kingdom of Quel'Thalas in search of answers but he will have to deal with a vengeful dwarf... the army of the Undead Scourge... and the unveil the mystery behind a peasant girl with an enchanting mystery before he can finally obtain what he seeks. Based on the worldwide online gaming phenomenon, Warcraft: The Sunwell Trilogy is as epic adventure that spans the realms of the Orcs, Humans, Elves and the Undead. [citation needed] 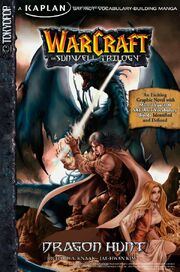 Definitions are on the margins surrounding the graphics, and words are in talk bubbles and sidebars describing the action.

This entertaining series features “Manga,” Japanese, Korean, and American comics that are the newest trend in teen fiction, which appeals to teens interested in a good read, exciting plots, and a more fun method of vocabulary review. However the vocabulary of words may seem a bit out of place for readers who want a casual read.

ART by Rei Izumi and STORY by Tatsuya Hamazaki