Not to be confused with northern islands.

The Dragon Isles are a location few have heard of, and which fewer have been to, according to Wrathion's Blacktalon Agent. Wrathion is searching for the isles but other dragons have not been forthcoming in information.[1] 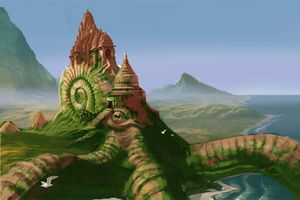 The Dragon Isles are a group of islands that were intended to be a level 65 - 70 raid in World of Warcraft located north of Lordaeron and west of Quel'Thalas, before being cut.[2] They were intended to be temples to the Old Gods.[3] The red dragon Alexstrasza was planned to be located here.[4]

They were depicted on an unnamed piece of concept artwork in The Art of World of Warcraft,[5] and later they were also in the World of Warcraft Diary. Nevertheless, the small islands still appeared, unlabeled, on the World Map until Wrath of the Lich King. It is only in Battle for Azeroth that the first canonical mention of the Dragon Isles was made.

There also exists a set of unfinished render models that were added to the game files during beta called "Dragon Isles", in a zone named Designer Island. The set consists of the main nautilus-shaped temple and also includes three caves with structures built over the entrances. A hermit crab-shaped temple was also designed but did not make it to the game files.[3]