This article is about the Cataclysm raid instance. For the formerly named artifact, see Demon Soul.

The Dragon Soul is the final raid instance of the Cataclysm expansion.[2] It was released with Patch 4.3.0 on November 29, 2011. Dragon Soul contains eight bosses, in multiple locations, culminating in the battle with Deathwing. It is the most difficult raid instance in Cataclysm, coming after the Firelands raid.

Characters will progress through Dragonblight, where Deathwing's forces are besieging the Wyrmrest Temple; the Eye of Eternity, the former sanctum of Malygos; and the trek through the ocean into the Maelstrom.

In order to unlock unrestricted access to Heroic 10M and Heroic 25M modes, the

The first six bosses of Dragon Soul were killed over several weeks,[3] while the battles against Deathwing lasted "a few terrible hours".[4]

Forged by Deathwing during the War of the Ancients, the Dragon Soul harnessed the power of the other dragonflights, until it was ultimately destroyed. After recovering a version of the artifact from the Caverns of Time, Thrall and the allied dragonflights now rally at Wyrmrest Temple in a desperate bid to use its might to defeat Deathwing.

Created by the titans as a sanctuary for all Dragonkind, the crumbling Wyrmrest Temple is now the final hope for the forces allied against the black dragon Neltharion, once the Earth-Warder and protector of Azeroth, now Deathwing the Destroyer. It is here that the remaining aspects -- Alexstrasza, Ysera, Nozdormu, Kalecgos, and Thrall -- have gathered to empower the Dragon Soul -- Azeroth's last chance to stop the great behemoth. As they begin to charge the Dragon Soul with energy, Deathwing and his entire army assault Wyrmrest Temple. Players must thwart the attacking forces long enough for Thrall to charge the Dragon Soul.[5]

Forged by Deathwing during the War of the Ancients, the Dragon Soul harnessed the combined power of the dragonflights until it was ultimately destroyed. Through the Caverns of Time, Thrall and the remaining dragonflights were able to recover the powerful artifact before its destruction. Now they have rallied at Wyrmrest Temple in a desperate attempt to use the might of the Dragon Soul against Deathwing himself.

The Siege of Wyrmrest Temple

Deathwing seeks to destroy Wyrmrest Temple and end the lives of the Dragon Aspects and Thrall.

Deathwing must be destroyed, or all is lost. 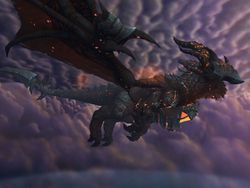 Deathwing heading toward the Maelstrom.

The raid picks up right where the Hour of Twilight instance finishes. Thrall and the Dragon Soul are now nearby Wyrmrest Temple and raiders begin by attempting to relieve the beleaguered Aspects under siege by the Twilight's Hammer, the Twilight dragonflight and the Black dragonflight. Along with an army of mortal races and dragons led by Lord Afrasastrasz you battle your way through the army and stop an earth elemental at the base of Wyrmrest Temple.

Morchok is pounding at the foundations of the spire trying to level it.

Once inside Wyrmrest Tyrygosa explains that Deathwing has summoned extremely powerful Faceless ones to assault the Temple as well, and Maws of the Old Gods are erupting from the nearby earth. Once they're dead the temple is all but reclaimed and the Aspects decide now its the time to strike. However upon meeting with them Thrall explains that using the full power of the Dragon Soul would likely kill him in the process, but Kalecgos believes they can use the Focusing Iris from the Eye of Eternity to stabilize it. The Twilight's Hammer knew about the weakness and sent several of their most powerful shamans under the leadership of

Ultraxion to finish them off - the ultimate Twilight dragon experiment who is meant to cause the Hour of Twilight by slaying the Dragon Aspects at this juncture. After his defeat the Dragon Soul is fully charged and Thrall unleashs it at Deathwing, blowing one of the elementium plates off his back. Realizing that the battle is lost, Deathwing destroys a Horde Gunship and flies off to the Maelstrom so that he can escape into the relative safety of Deepholm. The Aspects, the heroes, and the surviving crew board The Skyfire and chase after Deathwing. On the way, Twilight's Hammer drake riders, led by the Twilight's Hammer

Upon catching up to Deathwing they parachute onto his back and begin to rip off the armor plates and prying a hole big enough to give Thrall a clean shot with the Dragon Soul, this time burning a hole through his chest. Deathwing plummets into the Maelstrom and is presumed dead. The players and the Aspects land at the Maelstrom. As they celebrate the defeat of Deathwing, Nozdormu warns them to be quick, as Deathwing re-emerges shortly afterwards. The final stage of the raid begins when Deathwing's deformed body rises out of the Maelstrom to face off against the players in the final showdown with many phases. The first phase is moving around the isles around the Maelstrom. Players have to fight his claws, wings, tail alone and the tentacles. Once Deathwing is weakened the Aspects channel all their remaining powers into the Dragon Soul and fire it at Deathwing, completely "unmaking" him but also making them mortals. With the loss of Nozdormu's powers, the Dragon Soul was returned back in time to the point where it was taken.

Power of the Aspects

Main article: Power of the Aspects

Effective beginning the completion of server maintenance for the week of January 31st, 2012, the debuff "Power of the Aspects" is applied to all enemies in Dragon Soul, which reduces their health and damage dealt. The spell can be disabled by talking to Lord Afrasastrasz at the beginning of Dragon Soul if a raid wishes to attempt the encounters without the aid of the Dragon Aspects.

It is not possible to start heroic-mode Spine of Deathwing or Madness of Deathwing if any of the members of the raid have defeated any of the previous bosses in normal mode during that lockout.