Vice Admiral Keller at Valgarde Port in the Howling Fjord has asked that you bring him the Dragonflayer Battle Plans.

While we were able to gather very little information as to the whereabouts of Ingvar, we do know that Yanis resides in a cave next to the worg pit inside Wyrmskull Village.

I need you to go back to Wyrmskull and recover those plans. Kill any vrykul that get in your way, including Yanis!

You will also receive: 4

Have you recovered the Dragonflayer battle plans?

Outstanding! By the looks of things, there are many more vrykul villages in the fjord. A different tribe of vrykul is preparing for an assault on Westguard Keep. Hell, for all I know it may already be too late. We haven't heard from Westguard in days. Either way, we must alert Westguard! 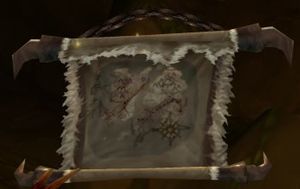