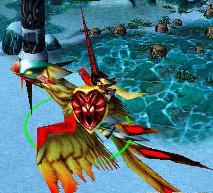 Dragonhawks riders (sometimes called as hawkriders and simply as dragonhawks) are swift flying unit mounted by high elven and blood elven warriors. The fierce warriors of the dragonhawk battalions are often the first into combat, picking apart the enemy ranks and surrounding enemy towers with dense fog so that reinforcements can strike unhindered by enemy defenses.[1] The riders are depicted with a shield and a lance, but they can also act as archers[2] and bombardiers.

Dragonhawk riders participated in the Third War when the undead Scourge led by the death knight Arthas Menethil invaded Quel'Thalas. Sylvanas Windrunner commanded a group of dragonhawk riders which attacked the Scourge shortly before the Ranger-General's demise.[3]

When the Scourge entered the perimeter of Silvermoon City, the dragonhawk riders from the city attacked the gargoyles with frenzied speed. During the fight, they were healed by High Priest Vandellor and priestess Liadrin. Despite this, the riders were outnumbered.[4]

Following the end of the Third War, several units were seen accompanying Prince Kael'thas. On Northrend, a group of dragonhawk riders and foot rangers attacked Arthas following his escape from Lordaeron. The elves were eventually killed as Arthas was aided by Anub'arak and his nerubians.[5] Arthas raised the dead elves into undeath.[6]

After Kael'thas betrayed Quel'Thalas and took control of Quel'Danas, several dragonhawk riders could be seen guarding the place and fighting against the Shattered Sun Offensive.

They are the high elf and blood elf version of windriders.

Known as the dragonhawks of Quel'Danas, the blood elves' deadly dragonhawk units are trained to scour the infested ranges of Quel'Thalas. From the aeries of the island refuge of Quel'Danas, these elite windriders seek intruders and report on the movements of troops through the scarred forests. Battle with the dragonhawks is a sudden, confusing, and swift move to find shelter from rending talons and razor sharp arrows. The blood elves use aerial tactics and minor spell strikes from the sky to tear through their foes like a fierce wind. They often defend themselves and their mounts with mage armor before engaging in battle.[8] Aquel'Luer'Thala is the commander of the dragonhawk riders of Quel'Danas.

Dragonhawk Masters and Ayren Cloudbreaker may be dragonhawk riders.