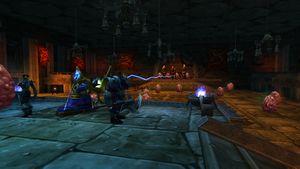 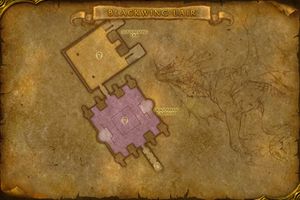 The Dragonmaw Garrison (also more commonly known as the Egg Chamber) is the first room of Blackwing Lair. It houses the first boss, Razorgore the Untamed, along with his controller Grethok and his two orcish bodyguards. Spread over the entire room are 30 eggs (hence the nickname 'The Egg Chamber'). The eggs cannot be harmed by any player ability; only Razorgore himself is able to destroy them, so the basic task is to

[Mind Control] (via the Orb of Domination) Razorgore and destroy the eggs with his abilities. Because Blizzard felt this might be too easy, the room begins to flood with three different types of elite mobs: orcish mages, orcish melee and black dragonspawn. There can be as many as 52 mobs at the same time running around (40 orcs and 12 dragonspawn).

Upon successful completion of the Razorgore encounter, the gate to the north opens, providing access to Shadow Wing Lair.