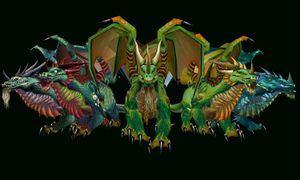 The Dragons of Nightmare (a.k.a. Nightmare Dragons)[1] were four green dragons corrupted by the Emerald Nightmare. Formerly Ysera's lieutenants, the four caused havoc across Azeroth for years until being stopped. Three were slain and one was redeemed.

They were Lethon, Emeriss, Ysondre and Taerar. These dragons were world spawns located in Duskwood (Twilight Grove), the Hinterlands (Seradane), Feralas (Dream Bough), and Ashenvale (Bough Shadow). The dragons were removed following Cataclysm. It was later revealed that Lethon and Emeriss were killed during the War Against the Nightmare, Ysondre freed herself from the Nightmare's corruption, and Taerar is killed during the Feralas storyline in

[40] Taerar's Fall, ending the Dragons of Nightmare's corrupt influence. They would return, however, when Xavius and the Nightmare resurfaced as bosses within the Emerald Nightmare raid.

[WoW's 13th Anniversary], the Dragons of Nightmare have returned for the anniversary event along with daily quest 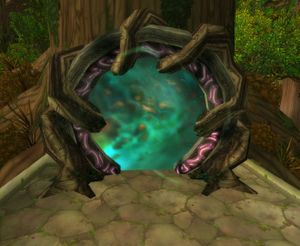 Prior to the start of the invasion of Outland, Ysera's most trusted lieutenants were warped by a dark new power within the Emerald Dream. These wayward sentinels passed through the Great Trees into Azeroth, intending to spread madness and terror throughout the mortal kingdoms.

Lethon's exposure to the aberration within the Emerald Dream not only darkened the hue of the mighty dragon's scales, but also empowered him with the ability to extract malevolent shades from his enemies. Once joined with their master, the shades imbue the dragon with healing energies. It should come as no surprise, then, that Lethon is considered to be among the most formidable of Ysera's wayward lieutenants.

Lethon was killed by the redeemed Eranikus during the War Against the Nightmare.

The mysterious dark power within the Emerald Dream has transformed the once-majestic Emeriss into a rotting, diseased monstrosity. Reports from the few who have survived encounters with the dragon have told horrifying tales of putrid mushrooms erupting from the corpses of their dead companions. Emeriss is truly the most gruesome and appalling of Ysera's estranged green dragons.

Emeriss was accidentally killed when Tyrande Whisperwind attempted to remove her corruption during the War Against the Nightmare, as it was all that was left of her.

Taerar was perhaps the most affected of Ysera's rogue lieutenants. His interaction with the dark force within the Emerald Dream shattered Taerar's sanity as well as his corporeal form. The dragon now exists as a specter with the ability to split into multiple entities, each of which possesses destructive magical powers. Taerar was a cunning and relentless foe who was intent on turning the madness of his existence into reality for the inhabitants of Azeroth.

In Cataclysm, he is killed by Ysondre with the help of adventurers during

Once one of Ysera's most trusted lieutenants, Ysondre had gone rogue, sowing terror and chaos across the land of Azeroth. Her formerly beneficial healing powers had given way to dark magics, enabling her to cast smoldering lightning and summon the aid of fiendish druids. Ysondre and her kin also possessed the ability to induce sleep, sending her unfortunate mortal foes to the realm of their most terrifying nightmares.

In Cataclysm, Ysondre was later freed of her insanity and, after aiding adventurers in killing Taerar, set about living a peaceful life among mortals for the rest of her days after 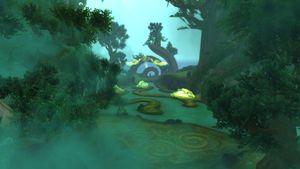 Ysondre and the Dragons in the Emerald Dream.

In Legion, Ysondre has been drawn back into the Nightmare and the corrupted spirits of her former comrades have joined her, completely consuming the Emerald Dreamway in shadows. She is ultimately slain, but her spirit and the spirits of her comrades are seen in the restored Emerald Dream after Xavius is defeated.

They are raid-level difficulty, though some dragons are more challenging than others.

All four dragons share the Sleep (summoning "Dream Fog"), Noxious Breath, Tail Sweep, Mark of Nature and Aura of Nature abilities. Each dragon also has a few unique abilities. One of these is considered the dragon's ace move, and will be performed when the dragon loses 25 ± 5% of its max life. In other words, the ace move will only be performed three times; when the dragon is at 25%, 50%, and 75% life. When it is performed, the dragon will also yell something. See the individual dragons' page for abilities and specific strategies.