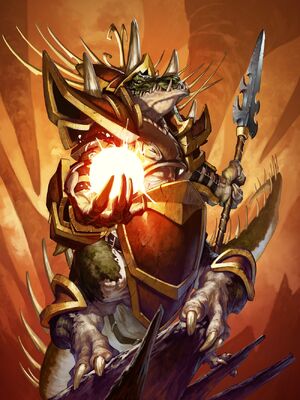 A dragonspawn in Hearthstone.

There are 5 main types of dragonspawn, serving each of the respective dragonflights. Their exact origin is not known.[2] 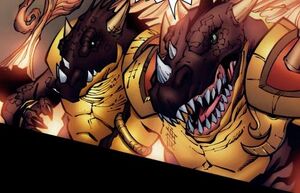 Modern humanoids devoted to the flights may have been converted — there are dragonspawn called "Wyrmcult Blessed" in Blackwing Coven and "Ascended Mage Hunter" in the Dragonblight, hinting at conversion. The same might also be true for drakonid, as there are "Dragonmaw Ascendant" on Netherwing Ledge.

The dragonspawn are semi-humanoid dragon-like creatures. They're somewhat similar in concept to a centaur — from the waist up they are humanoid lizards and from the waist down they have the body of a dragon. They walk on their four dragon legs, and use their arms to carry their weapons. They usually wear armor. The largest, most powerful dragonspawn (ie: General Drakkisath in UBRS) have wings as well, though most don't. They don't seem to be able to actually fly though.

Dragonspawn are monstrous beings trained to serve under the five dragonflights of the world, and some say they evolved from humans who dedicated their lives to servitude under the great dragons.[3]

The dragonflights of Azeroth are not without retainers and assistants. Noble humanoids serve the dragons with absolute loyalty, acting as footmen, soldiers, assistants, and companions. They are endowed with many of the dragon's mystic abilities and virtuous qualities.

Exactly how they came into being is a guarded secret of the flights. Though they have dragon-like qualities, these creatures are not descended from dragons. Instead, they are distant kinfolk, descended from humanoids who spent their lives so close to the dragons that they took on the qualities of their masters after generations of service. They are gifted with unique advantages of their dragon blood and heritage, including immunity to their dragonflight's breath weapon. They have the same alignment and goals as their patron dragonflight. The lower bodies of dragonspawn are much like dragons, a scaled hide with four legs and a tail. They have humanoid torsos with long, thick arms, and scaled, draconic heads. Their hides and draconic features are the color of their patron flight. They can be of either gender and serve their dragonflight with the utmost dedication. Dragonspawn have similar physiques regardless of the flight they belong to, but each individual squadron is armed in the color of its dragonflight. Furthermore, dragonspawn often bear a mark upon their breastplates or shields that reflects their individual mentor or patron, giving honor to the dragon who trained them. Armor always reflects the scale coloring of the patron dragonflight (black, blue, bronze, green, or red). On Azeroth, draconic influence does not increase the potential to be a sorcerer. As such, those few wyrmkin who do develop magic abilities are prized as rare "throwbacks" to their ancestral human ties.[4]

Dragonspawn society is limited in scope and is comprised of flametongues, scalebanes, and wyrm kin. Trained as a slave race, they worship dragons and are willing to die without question in their mentor's name. They prize loyalty and honor as well as strength at arms, and their societies are little more than military units and segregation. Dragonspawn are most often seen near or around the holdings or lairs of the dragonflights they serve. They travel in small to large organized squads, marching in formations.[5] 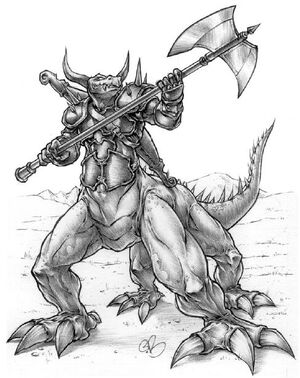 Each dragonspawn host has a unique way of waging war, with few similarities among them. One of the few unifying tactics is an en-masse assault that involves hindering enemy movements with great numbers of wyrmkin infantry. As the dragonspawn occupy enemy forces, a dragon invariably bathes the writhing melee with its breath weapon. Dragonspawn are immune to the breath weapons of their hosts, so these attacks leave devastating gaps in enemy defenses. With this tactic, the dragonspawn systematically wade through the remnants of now charred or slowly dissolving enemy formations.

In close combat, the tactics of a force of dragonspawn vary from host to host. Black dragonspawn are brutal and relentless, often able to rage and sunder the enemy’s defenses with their brute strength and vicious claws and teeth — augmented by draconic magic or magical equipment.

Red and green dragonspawn rely on strategy, planning and sheer strength. Their ability to intimidate the enemy through size and numbers serves them well; few can withstand the sight of a tactically sound dragonspawn charge.

Bronze and blue dragonspawn are the most likely to use offensive magic in combat. They rely on spellcasters and magi like other armies might rely on archers. With waves of arcane bolts and fire falling from the sky, an opposing force often finds itself the victim of arcane assault long before it will ever engage a dragonspawn in close combat. When a dragonspawn finally moves in for the kill it is armed with alchemical flasks, weapons, and magically enhanced armaments, and heavy armor covers it from head to toe.

Dragonspawn rely on castes to regiment their armies. Wyrmkin serve as solid ground troops. These warriors train long and hard, and serve as buffers between a dragon and his enemies. Scalebanes serve as unit commanders in the field, acting as the instruments of their master’s will. Half taskmaster, half drill sergeant, a scalebane often serves as the source of a dragonspawn host’s arcane firepower. Most are warriors and magi both, capable of bringing sword or spell to bear on an enemy. Heavily indoctrinated by their masters, and privileged with better living conditions and food, scalebanes are the dragonspawn elite in the actual field of war. They are much more highly valued than most wyrmkin.[6]

Dragonspawn names are harsh and simple, with no family name to speak of; they are usually referred to by their place in the hierarchy, much like a military rank, and the name they were given at birth. Dragonspawn adventurers often refer to themselves simply by their given names.[7] 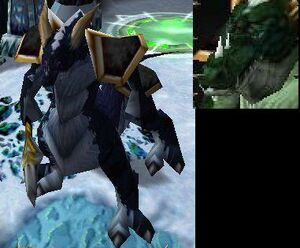 Heeding the call of their goddess, Ysera, the Green Dragonspawn stand to protect Azeroth from the waking evil within the Sunken Temple. Dragonspawn form the ranks of the ground army within each of the five great dragonflights. Among the murk-ridden marshes of the Swamp of Sorrows, the Green Dragonspawn patrol at the behest of their dreaming mistress; Ysera has warned of a lurking terror within the temple, and her loyal servants are determined to protect the land from the emerging doom.

Drakonid have long been thought to have been artificially made by combining dragon and human blood in the labs of Blackwing Lair, but recent evidence shows that the drakonid may also be a natural variant of dragonspawn. Some drakonid such as Maxnar the Ashmaw, the drakonid of the Caverns of Time, the ones defending the Wyrmrest Temple and those in service to Malygos are unrelated to Nefarian, and could not have been made by him. If this is true, why Nefarian would have to make non-chromatic drakonid is unknown. The difference between natural drakonid and dragonspawn is also unknown.

Considering the process of becoming a dragonspawn is supposed to be quite lengthy, it is possible Nefarian simply wanted a way to accelerate the process and thus found a way to artificially create drakonid.