From Wowpedia
(Redirected from Dragonwrath)
Jump to: navigation, search 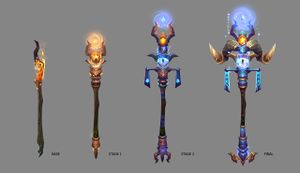 Players will need to embark on an epic questline to obtain and upgrade this powerful weapon.

Dragonwrath, Tarecgosa's Rest is a legendary offensive caster staff, with bonuses that are not particularly attractive to healers.

It is rewarded by an epic questline that challenges those daring enough to complete it. The great staff duplicates destructive magics, and also bestows upon its wielder the ability to transform into a member of the Blue Dragonflight. Those who complete the staff won’t be the only ones to receive a reward, though. As this task requires the dedication of an entire guild, upon completion of the staff all guild members will receive a unique non-combat pet to call their own.

The staff is named after Tarecgosa, the blue dragon that gave her body to protect Kalecgos and to see the Blue dragonflight's new aspect debate come to an end. Her essence resides within the staff.

The body of the staff is actually a retrieved

The spell duplication mechanic is unique to this staff and exhibits several interesting synergies with class mechanics.

<The staff pulsates with arcane energies.> 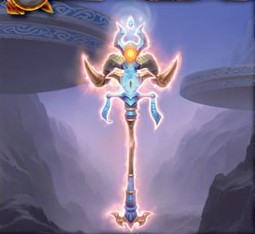 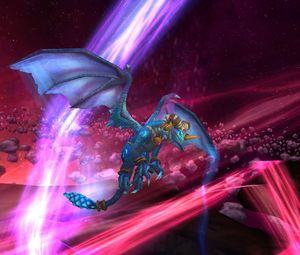 A player transformed into Tarecgosa's Visage

What occasion brings you to our home town, drake?

Kalecgos has been chosen as the new aspect for the blue dragonflight.

One among you was instrumental in thwarting Arygos's betrayal to Deathwing, thereby averting a terrible crisis.

We are here to partake in the celebration of their heroic deeds.