Drak'Tharon Keep is an old ice troll fortress located between the northwestern border of the Grizzly Hills, and the southwestern border of Zul'Drak. It contains one scaled instance for level 62 - 80 players. On heroic, it awards approximately 2000 reputation. 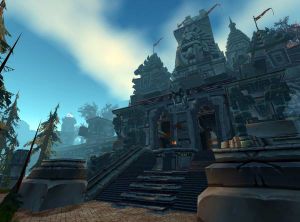 The southern entrance to Drak'Tharon Keep.

Drak'Tharon Keep is located in the icy northlands of Northrend, in the northwestern part of the Grizzly Hills. It is an ancient ice troll stronghold that has since been claimed by the Scourge. The undead control passage into the lands beyond from here, and use the keep as a staging point to attack Zul'Drak.

Mal'Ganis's base in the Third War where he was "killed" by Arthas wielding Frostmourne was close to Drak'Tharon Keep.[1]

The leader of the keep, Prophet Tharon'ja, sends his minions towards Zul'Drak in order to try to defeat the ancient ice troll empire.[2]

The undead Drakkari ice trolls have begun pouring from their stronghold of Drak'Tharon Keep, and are assaulting the furbolg. The invasion is oddly credited to the Drakkari themselves, not the Scourge.[3]

Even the most formidable ice troll warriors have failed to retake the conquered fortress. Neutralizing Drak'Tharon as a threat to Zul'Drak's future will be a task requiring immense bravery, and unless it is done soon, the entire empire, along with the power of its wild gods, may fall to the Scourge.[4]

Drak'Tharon Keep once served the Drakkari trolls as a formidable outpost at the edge of their kingdom, Zul'Drak, but a recent Scourge invasion has delivered the fortress into the Lich King's hands. The keep's fallen defenders are now the Lich King's undead minions, and they are advancing into the heart of Drakkari territory. 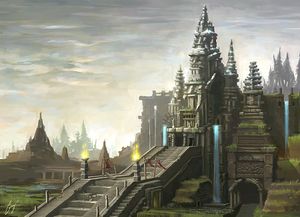 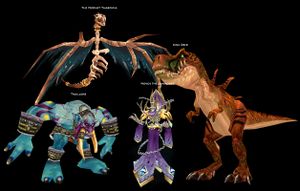 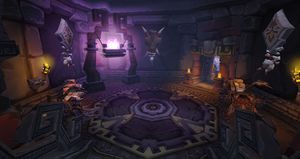 Drak'Tharon Keep in Lands of Mystery.

Drak'Tharon Keep is an ancient stone citadel located on the northern reaches of the Grizzly Hills (very close to the border with Zul'Drak) that once belonged to the Drakkari trolls. The Scourge drove them out, took possession of it, and now have a garrison here holding the mountain passes. It is a well placed, solidly built structure, and the small group of undead within can easily hold the keep against forces ten times its size, particularly since they don't need food or water during a siege.[5]

The Scourge forces here are typical: nasty, violent and focused. The passes they hold the are located between Zul'Drak, the Dragonblight, and the rest of the Grizzly Hills, so that more Scourge forces can reach the east or return to Icecrown Glacier.[5] They use it as the Scourge's powerbase in Northrend's southeastern corner. Two thousand Scourge creatures patrol the ruined old keep and often fight Drakkari and occasionally furbolgs, though they have yet to attack either Gundrak or Grizzlemaw directly.[6] Thus far, the Scourge has not penetrated into Zul'Drak to any degree.[7]

Some stories say that the Drakkari built Drak'Tharon Keep before the furbolgs built Grizzlemaw, and the existence of the later affected the balance of the former. The furbolgs' victory over the Drakkari in a series of skirmishes may have led to Drak'Tharon's eventual loss of to the Scourge.[8]