For his The Frozen Throne statistics, see Drak'thul (Warcraft III).

Drak'thul is an orc hermit who dwells alone on the Broken Shore, in the Broken Isles. He was once a warlock of Gul'dan's Stormreaver clan, but went into exile after the clan was eradicated at the end of the Second War. Years later, he was encountered by Maiev Shadowsong during her pursuit of Illidan Stormrage.

When the Stormreavers and the Twilight's Hammer betrayed the Horde near the end of the Second War, they fled to the Broken Isles, led by Gul'dan, and raised the Tomb of Sargeras from the seafloor. However, when Gul'dan, the Stormreaver chieftain, entered the Tomb in search of the demonic power within, he was slain by the Tomb's demon guardians. Between them and the vengeful Blackrock clan forces, the Stormreavers and Twilight's Hammer were both nearly eradicated, with Drak'thul being one of the few survivors. He chose to became a hermit, wandering alone around the Broken Isles, constantly haunted by the ghosts of the many orcs who died in the battle.

Many years later, Drak'thul was discovered by Warden Maiev Shadowsong, who asked him what happened on the isles. Drak'thul, wishing to be rid of the ghosts, said that he would tell her his story if she destroyed the battling apparitions. Maiev destroyed the skeletal orcs, took the artifact that was reviving them from the pits and returned to Drak'thul to show the artifact to him. When the orc told her his story, Maiev regretted doing his bidding, saying that he deserved far worse than the company of his slain brethren for what he and his comrades had unleashed on the isles. Drak'thul responded by silently retreating back into his hut.[2]

Drak'thul remained on the southern shore of Thal'dranath all those years. He at first refused to talk to visitors but, after they found the

[Weathered Relic] in a cave near the center of the island, Drak'thul revealed that a while after Maiev left, the ghosts' whispers returned. But they were different, deeper and darker. Drak'thul learned many things during his time on the Broken Isles, delved into places he wished he had not, and learned things he longed to forget. He now only wishes to be alone until darkness overtakes him at last. It is implied that the whispers he heard were related to the Old Gods and Kosumoth the Hungering, since at one point Drak'thul unconsciously spoke Shath'Yar.

This weathered orc wears a tattered wolf pelt and a pair of tarnished bracers sprouting wolf hair. The wolf's head falls over his face, obscuring his eyes, but his long gray hair spills, greasy, down his shoulders. He moves with arthritic care. Drak'thul didn't survive to become one of the last Stormreavers by being stupid. He is a canny combatant, staying back when he needs to stay back and striking preemptively when the situation warrants. He prefers ranged attacks, like shadow bolt, to eliminate his opponents early; if forced into melee, he uses spells like demon skin and mirror image to improve his chances. He avoids using his battle rage ability, as it clouds his mind and prevents him from fleeing if he is outmatched.[3]

Some time later, Drak'thul attacked the renowned explorer Brann Bronzebeard, thinking that he was a murloc. After he realized his mistake, Drak'thul apologized and agreed to share the history of the Broken Islands with him.[4] 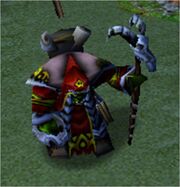 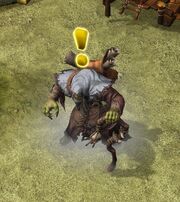 Maiev Shadowsong: An orc! I smell the stench of demons about him.
Drak'thul: Rest easy, stranger. This old wanderer has no quarrel with you or your kin. I am Drak'thul, once an powerful warlock of the Stormreaver Clan. Now I am the last of my kind.
Maiev Shadowsong: What are you doing here?
Drak'thul: Your pardon, lady, but I am being hunted by restless ghosts. They've chased me day and night for nearly twenty years. Perhaps if you silence them for me, I will tell you my tale.
Maiev Shadowsong: I'll consider it.

Maiev Shadowsong: The dead will trouble you no longer, old orc.
Drak'thul: Thank you, stranger. Now, hear my tale. Nearly twenty years ago, the great warlock Gul'dan raised these islands from the deeps. He sought to unearth an ancient vault that held the remains of the Dark Titan.
Maiev Shadowsong: Sargeras! You speak of the Legion's creator!
Drak'thul: The same. After Sargeras' defeat, ages ago, his remains were locked away in an undersea tomb. Gul'dan believed that opening the tomb would grant him the Dark Titan's power. For his pride, he and the rest of our clan were torn to shreds by crazed demons. I have wandered these isles ever since, haunted by the ghosts of my slaughtered comrades.
Maiev Shadowsong: Your tale is as intriguing as it is dire, Drak'thul. It's a shame your ghosts lie silent. You deserve far worse than their company for what you set loose in this place.

The demons are taking over this island, you may want to leave.

Heh. You think me a foolish old orc, frail and ready to be put to the wolves? I was communicating with demons when you were in swaddling blankets.

You must know much. Will you help us defeat them?

They are not your enemy, fool. Now go away.

Talking to him with the Weathered Relic
First conversation
Go away.

Do you recognize this relic?

Where did you find that? It has been many years...

<Drak'thul turns the relic over in his palm, and then hands it back to you.>

The ghosts have long since stopped their whispers. There was silence, for a while.

Tell me of these whispers.

They do not come when I beckon, fool.

Third conversation
<Drak'thul's eyes are sunken and unfocused. He has his head cocked slightly, as if listening to something you cannot hear.>

You are yourself again. What happened?

The whispers called to you.

I have learned many things on[sic] my years on these islands. I have delved into places I wish I had not, and learned things I long to forget.

And now I wish to be alone, until darkness overtakes me at last.